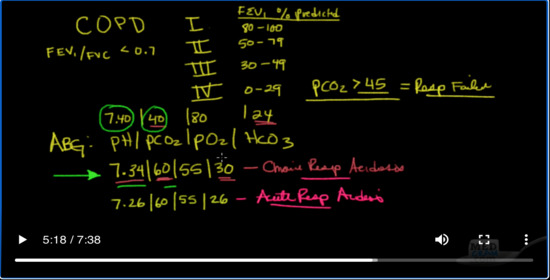 So another common problem that we see is COPD patients. Now COPD patients can come in various stages. There is stage 1. There is stage 2. There is stage 3, and there are stage 4. And you can clean this off of a pulmonary function test. If a patient has had a pulmonary function tests, usually you’re seeing these patients in the hospital and you don’t have access to them. COPD by definition is somebody with an FEV1 / FVC of less than 0.7. And if they meet that criteria, the stage for COPD is based on FEV1.

So what does a typical blood gas look like for somebody who is normally cruising along in chronic respiratory failure? Well, you may recall from acid-base. Let’s take a look at an ABG. Okay. So remember the ABG is the pH/ PCO2 /PO2 and then finally the HCO3, so a typical blood gas for chronic respiratory failure would be so like 7.34, 60, 55, 30. Now notice here the normal PCO2. I’ll put it here is 7.40, 40, 80, 24. So what’s happened here? Let’s take a look. What’s happened is because the patient has severe COPD and cannot ventilate well, the PCO2 builds up from where it normally would be at 40 to 60. Now as a result of that, the kidneys become very good at retaining bicarbonate. So instead of the bicarbonate being 24, it’s now 30. These things cancel each other out almost but what you get is a little still bit of an acidosis. And so instead of your pH being much lower from the retain carbon dioxide, the pH is only dropped to 7.34 which is very close to a normal of 7.35 to 7.45. So this one is chronic respiratory acidosis.

What would it look like if the kidneys had not kicked in? Well, if the kidneys had not kicked in, you would have here’s your PCO2 of 60. Here’s your PO2 of 55, but because your kidneys are not kicked in, they would still be around 24 to 26. Okay, so this would be known as acute respiratory failure. So if you calculate that in, your PH is actually going to be something around 7.26, so that would be something more akin to acute respiratory acidosis.

Now the reason why I bring this up is because when these patients come in who are in this category, the chronic respiratory acidosis. These are patients with COPD. They’ve got active disease. Their reactive sometimes they come in with exacerbations and as a result of that they end up being on the ventilator. And the question always becomes is what do we ventilate to. Do we ventilate the patient to bring the PCO2 back down to 40 which is probably what their CO2 was years ago, or do we bring their CO2 down until the pH becomes normalized around where it should be? And the answer is that you really want to aim at ventilating these patients not down to a PCO2 of 40 which their body hasn’t seen probably in years, but instead down to their baseline PCO2. And if you don’t know what their baseline PCO2 is, you can kind of guesstimate because this bicarb doesn’t change for days. Okay, and if you get the PCO2 down to around the range where they were before at their baseline what typically happens if there’s no other acid-base problem going on is you should end up right in the low 735-736 range.

So what you want to do is the bottomline is you want to ventilate with a pH target in mind of 735-740, rather than ventilating with a PCO2 target of 40 because it’s normal. Okay, you don’t want to do that. Let me tell you what happens if you try to do that. What you’re going to end up doing is you’re going to basically over ventilate the patient more than the patient would normally be ventilating at their baseline. And if you can continue to do that for a number of days, the kidney is going to see that this CO2 level is much lower than it’s used to. And as a result of that, the kidney is going to no longer retain the bicarbonate that it was doing at its baseline, but instead dump it.

And what you’ll see is this this bicarb will then drop down to the normal level about 24. Well when the patient is ready to come off the ventilator and you start weaning them, their CO2 is is going to go right back up to 60 because that’s their baseline. So let’s say you fix them and now their lungs are going to go back to their baseline. Well because their kidneys are now filtering for a bicarb of 24 and because their lungs only do a PCO2 of 60, you’re going to get this type of a pH and that type of a pH is not good for weaning. And so it’s imperative that you don’t over ventilate these patients, but that you ventilate them where their baseline normally would be. And this kind of goes in line with what we just talked about before which is ventilating metabolic acidosis patients in terms of matching their pre-intubation minute ventilation, but this is the other extreme on the other side. Here if they’re hypoventilating we want to basically match that when they get on the ventilator so that we don’t mess up their kidneys and their their bicarbonate withholding or reabsorption.