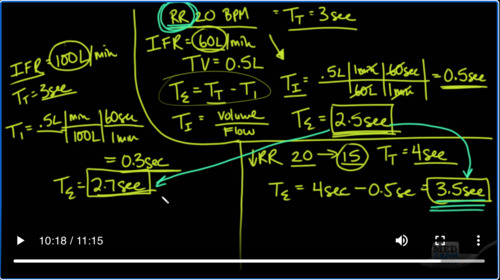 Medcram.com. Okay, thank you for joining us. If you will recall, in our last discussion, we had a problem with a patient on the ventilator who is asthmatic. This could also work with somebody with COPD as well and we found out that there was just not enough time for exhalation. Before the next breath was going to go in and we said that that could cause Dynamic hyperinflation cause overinflation of the lung and causes some disastrous, if not life, threatening conditions that could cause the patient to go south

Real quick. So in that situation where the patient has impending doom, of course the treatment is to disconnect the patient from the ventilator to allow all the air to come out of the lungs that could take a number of seconds I’ve seen as long as 20 seconds for the lung to completely deflate itself. In these kind of situations, obviously, you’re giving these patients steroids, you’re giving these patients continuous nebulizer treatments. You may even be giving this patient magnesium, which is sometimes recommended in these situations, especially if the patient doesn’t have renal failure, and is not going to accumulate

That is up to a certain point, obviously because the faster you breed the less time you have for exhalation. So by reducing the respiratory rate you’re going to allow more total time for Respiratory cycle and that is going to push this ending of exhalation out as far as possible. How is it then that can you can push this starting of exhalation up as close as possible? Well, the way you do that is by reducing the time you spend an inhalation. Well, what determines? How long

Spend in inhalation the way you do that is with something called the inspiratory flow rate.

This is basically how long it takes to blow a certain amount of liters of air into your lungs by the ventilator. And this can be anywhere from 60 liters per minute, all the way up to a hundred liters per minute, that’s the general range that you will see on a ventilator. Obviously, the faster we’re pushing are in the less time. It’s going to take to get a certain amount of air into the lungs generally speaking, let’s say about 500 milliliters of air could go in.

She clearly, which one of these is more effective at doing this. So, let’s take our patient again and let’s assume that the patient’s respiratory rate is at 20. We’ve just intubated the patient and paralyzed her. She cannot breathe faster than the ventilator rate is set at. And this case, the respiratory rate is set at 20 breaths per minute. And what does that mean? If we’re selling at 20 breaths per minute? That means there’s 20 breaths in one minute, which means that each breath is going to last

a total time of three seconds. Let’s also take a look and say that the inspiratory flow rates. We are setting at a modest 60 liters per minute. And then the other thing that will say is that the tidal volume that we have set in at the ventilator is 0.5 liters total. So those are our settings and with that we have seen that the patient’s blood gas afterwards is

In inhalation divided by the flow that it takes to get that are in. So what does that mean? That means that where we are currently set up right now that the time it takes for inhalation is simply equal to the amount of volume that we’re going to give which is 0.5 liters. We could divide it by our inspiratory flow rate which is 60 liters in one minute. But remember that in one minute there are 60 seconds. And so what you’re

Left with here, is that the 60s cancel out, the minutes? Cancel out and what you’re left with here is that it takes exactly 0.5 seconds for inhalation. So if the total time is 3 seconds, between respiratory breaths and the I time is point five seconds, then that means that the totally time. The amount of time that we have for exhalation, is going to be equal to 2.5 seconds. And obviously in our patient that that is not enough time.

So, let’s take a look at if we increase the inspiratory flow rate. So let’s say we increase the inspiratory flow rates and keep everything else. The same and let’s say, we increase it instead of it being 60 liters per minute. Let’s take a very large jump and go to 100 liters per minute. That’s a pretty significant increase. So, we really want to see whether or not, this is going to work. Remember that the total time is still 3 seconds because we’re not changing anything else. We’re not changing the respiratory rate.

So in this case, the total I time is going to be again point five liters because we haven’t changed anything there. And in this case we’re going to be having 100 liters per minute. But again there are 60 seconds in one minute and so if we do Point 5 times 60 divided by a hundred, what we get to is 0.3 seconds.

Certainly an improvement. Let’s see if it’s enough. And so for that, let’s go to the other thing that we can do, which is to reduce the respiratory rate. So, by reducing the respiratory rate, we are going to, let’s say go from a respiratory rate of 20 to 15. What does that mean now? Because we’re breathing 15 times a minute, our total time is going to be four seconds because there are 15 for second intervals.

Owls in a minute. And so because of that, we look at our equation again here and we see that Artie expiratory is going to be equal to RT total, which in this case is now four seconds – the same point 5 that it takes for inhalation and we’ll see that that gives us 3.5 seconds of total exhalation time. So now we’re looking at two point five to two point seven or 2.5 to 3.5 clearly you can see

That the most important thing that you can do in a patient who has Dynamic hyperinflation over inflation from not getting the air out of their lungs in either COPD or a acute asthma flare. The biggest thing you can do again is to reduce the respiratory rates and it’s important, especially, in these patients, who have asthma, especially in these patients, who have anxiety where they’re hyperventilating, because they’re very nervous. This is going to make Dynamic, hyperinflation, even worse than it already.

Already is of course if you were to do both of these changes at the same time, your new tea expiration would have been 3.7 seconds, so do both. But remember that? It’s the respiratory rate that is the most important change that you can make other times. You have to realize that sometimes you’re in over your head. I’ve had patients before where I’ve not been able to make the appropriate changes on the ventilator and despite everything that we’ve done the patient, still did not improve. And in these situations

Patience. You’ve got to kind of see that coming and one particular situation. We had a patient that we had to literally handbag for about an hour or two and got them onto a helicopter, transferred them hundreds of miles away to an ECMO Center where they could do bypass basically of their lung, until we were able to get their asthma under control and they survived. And it was because we were thinking quickly and realize that these patients weren’t good improve on just vent settings, thank you for joining us.