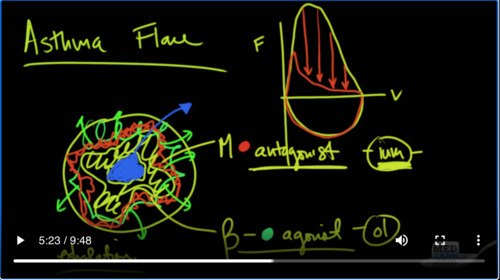 Medcram.com. Okay. Welcome to another medcram lecture. We’re going to talk about a case today, so imagine you go down to the emergency room to get called and there’s a 25 year old Caucasian female who is about 4 months, postpartum.

And she’s having a hard time breathing so she’s got shortness of breath. It’s been going on for about a week and it’s Progressive and she has a history of asthma, but she has been remiss in using her inhaler

And on physical examination, you notice that she has got bilateral expiratory wheezing.

And her respiratory rate is in the 20s and she certainly is looking anxious and in fact she’s got a history of anxiety disorder as well.

Her vital signs. She’s afebrile, her blood pressure is 150 over. 70 pulse is already in the 120s and that’s because she’s already received an Albuterol and atrovent nebulizer. She saturating in the low 90s about 92%. And as we said, her respiratory rate is in the 20s.

You do a blood gas and her pH, looks something like 7.35, pco2 is in the high 40s. Po2 is in the 80s, and bicarb is 24. So you give her a nebulizer treatment again, and you start steroids. So steroids, nebulizers, give a little bit of oxygen, but she doesn’t get better. If you continue to have issues.

Is so you start her on some BiPAP because she looks like she’s using some accessory muscle use and you start her on regular setting of about 10 over 5. When you increase that to 12 over 6 and you draw another Blood gas and instead of 7.35 after about two or three hours of battling with her and everybody else in the emergency room, you now get a ph of 7 point 2, 0 64 75 and 24.

Or and that’s on BiPAP. She is awake alert oriented but she’s a little bit more lethargic than she was initially. Okay, let’s stop there and talk a little bit about what’s going on with her and the diagnosis. So most likely, this lady has an asthma exacerbation. And remember with asthma, you’ve got a bronchus and you’ve got smooth muscle. That’s going all throughout this.

And because of inflammation that is occurring in this area. So inflammation causes contraction of this down to a small hole and as a result of that, the air has a hard time getting out and that’s the key word there is out. So air can come in but are has a very hard time coming out and you have a problem therefore on exhalation

If you were to look at a flow volume Loop, you would see a normal flow volume Loop. Looks like this. You have a lot of air coming out initially and then you get to the small Airways and then you take a deep breath in. So that’s what a flow. Volume look will look like with flow here on the y axis and volume on the x-axis in small Airways disease. Either in COPD, or when you have an asthma flare, you are going to look very similar on inhalation, it’s not going to affect the about of air that can go into the lung.

What you will see on exhalation is no issues with the large Airways, but you’ll notice that the small Airways are definitely decreased and so you can see her flow rates on exhalation are incredibly reduced. And again that’s primarily because these small muscles here in the Airways in the small Airways particularly are contracted. Now there’s two receptors that you’ve got to be aware of on here. There is a muscarinic receptor.

And so, those are just about all of the medications that end in. I, um, so tiotropium, ipratropium, you meklord, idiom. All of those anticholinergic medications, whereas these beta agonists, are the ones in endon ol, that would be like, albuterol some meter all for model. So the iom’s again, are the muscarinic antagonists. There is one that does not end with i. Um, and that is glyco pie, relate. So that’s the one exception to this but the

Are you MSR? The muscarinic antagonist? The oh elzar, the beta Agonist. And what that’s going to do is it’s going to open up, those are ways, which is what you need to get air out. And so, that’s the real problem. Here are cannot get out. And, of course, it goes without saying that they are must come out during the exhalation phase. And so you want the exhalation phase of breathing to be as long as possible. Well, that’s hard to do when the patient’s breathing fast, because that gives a short amount of time for both inhalation and exhalation.

Okay. So let’s continue as it goes, our patient continues, to get worse, and now she’s becoming more confused. And so, the decision is made to intubate. But before the patient, gets that intubation, there’s another Blood gas that’s gotten on this patient, and it clearly shows a worsening acute. Respiratory acidosis. This time, 7.10 8070 and 24. Remember now that the bicarb has not changed, the po2 is a little

Last, the pco2 has greatly increased and that’s cause the pH to drop pretty precipitously. And so, the patient is intubated with an endotracheal tube and put on the ventilator. And the initial settings, for the patient are a sea of 20, a tidal volume of 500, a peep of 5, and an fio2 of 100%. So this means that the patient’s going to get a breath at least 20 times.

As per minute more, if the patient demands that the tidal volume of each breath is going to be 500 MLS or half a litre. The amount of pressure left in the circuit is going to be 5 at the end of exhalation and the patient’s going to be breathing in a hundred percent oxygen. So after a while of the patient being on the ventilator and x-rays taken it shows that the patient has clear lung Fields, there’s a heart but that the Hemi diaphragms are very flattened and the rest of the lungs are consistent with Hyper expansion.

Patient’s. Blood pressure starts to drop slightly, that could be because of the fact that the patient was sedated and intubated and sedated for that, or it could be because of hyperinflation. And so, what we are concerned about is the patient is having something called Dynamic hyperinflation and let me explain to you. What this is, what happens here is that the air goes into the lungs.

As the air goes into the lungs, it inflates the lungs and this case we’re giving 500 mL s of air. But because the Airways are so obstructed that it takes such a long time for the air to come out that, let’s say, only 450 mL of air come out before the next breath, which is either determined by a time constant or when the patient takes another breath, another 500 goes in when only 450 came out. And so what happens is what that next breath? You’re going to get a little bit

More hyper inflated and with the next breath a little bit more hyper-inflated. And so that’s called dynamic because this happens over a period of time, hyperinflation. So what happens, there is that the intrapleural pressure start to increase and that can prevent venous return. That can also increase your Plateau pressures. It can also cause issues with Peak pressures. And so, the compliance of the lung becomes less and less and less. And with less venous return, you’re going to get less cardiac output and a decrease in blood pressure. And so really

The the Crux here is that when patients have severe asthma exacerbations and they’re put on the ventilator and they start to dynamically hyper inflate. The real key here is that there is not enough time for exhalation.

Exclamation point triple underlined, that could be potentially a serious fatal situation where the patient could die, because there’s not enough time for exhalation. If you ever see a situation like this, where the patient is dynamically hyper-inflated and they can’t trigger the ventilator because there’s so much positive pressure inside their lungs, and their blood pressure is going down and their heart rates going up. You should detach them from the ventilator and allow a proprietary amount of time for all of the air to come out of their lungs.

Lungs. So, that blood can come back to their heart and they can get a blood pressure short of that. How would you prevent a patient from getting in this situation? Well, join us for our next video where we talked about ventilator, management issues and things that you can do to prevent specifically patients with obstructive lung disease, asthma or COPD to ventilate without running into these situations. But again, the failsafe way is to disconnect the patient immediately and let that lung deflate. Thanks.