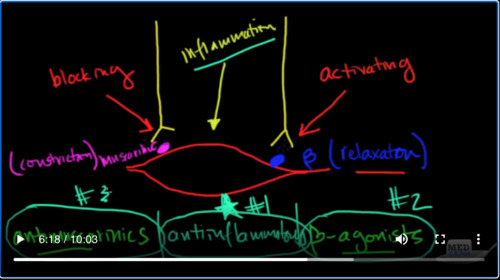 Medcram.com, welcome to another medcram lecture. We’re going to talk about asthma and specifically the causes the pathophysiology diagnosis and treatment of this very common disease. I want to kind of show you what’s going on at the bronchial level. You remember, if you look at our pulmonary function test discussion, we looked at a flow volume Loop. And what happens when you blow out air very quickly, you’re forced expiratory volume or flow rate goes up very quickly and then comes down

Okay. So there’s two major things that are occurring in asthma or obstruction of these small Airways is, you’ve got some sort of an inflammatory process for whatever reason that’s going on here. This inflammation stimulates certain Cascades that occur and it causes smooth muscle constriction. And as a result, the inflammation causes the Lumen to get smaller and smaller and smaller. Until finally, there’s wheezing, there’s

And the primary problem is that you can’t get air out of these small Airways and that is why in an asthma attack. You will see that this flow volume Loop comes down and the flow rates. In these small Airways is almost non-existent. That’s when you run into asthma attacks. Now, the severity of this contraction is going to give you the severity of the asthma attack and how we affect this and what the path of physiology is of this is going to determine how this is treated. So well, let’s talk about that a little bit.

Once again, I want to emphasize that in asthma. What we have is reversible

Airway inflammation. That is opposed to are reversible, which we would see in COPD where this Airway inflammation has occurred, and this constriction has occurred in COPD. Its kind of are reversible in asthma. We can actually reverse it back to almost completely normal this inflammation and constriction. Can sometimes be mediated by ige. So, sometimes you will see elevated ige levels and that fits into the path of physiology. And the

Which is going to make the the area in that Bronco, even smaller ige uses. The basophils and mast cells.

There are ways of preventing these cells from releasing histamine and that is sodium kromagg like eight.

You’ll see for instance medications like Chrome 11, sodium kromagg, like eight is used to stabilize these. Mast cells and basophils and prevent histamine. So sometimes we actually use that in the treatment of asthma, okay? So again I want to review the bottom line here, is that, we’ve got a situation where you have inflammation, which causes constriction of the smooth muscles in the bronchioles. So let’s talk a little bit about the smooth muscle. Then

Okay, we’ve got nerves that affect the smooth muscle two types of nerve specifically and they have receptors.

The first one I want to talk about is the beta receptor. So you have a nerve that comes down and it releases

compound, which hits this beta receptor and this causes relaxation.

And there’s another receptor which is the muscarinic receptor.

And that causes constriction.

And so in both asthma and COPD, as it turns out, we want this muscle to be relaxed. That’s the goal we want relaxation. And so what we’re going to actually end up doing is activating

This receptor and blocking.

That’s how we get to the treatment. Now, the other thing that we’re going to see pharmacologically and we’ll talk about, this is inflammation.

Inflammation is going to cause constriction, because of inflammation. So, what we’re also going to use is

So what I’ve just shown you here are the three cornerstones of asthma treatment. Some of them are going to be used first because they’re much more effective than others, and you could, probably guess. Which one is going to be most effective because inflammation is starting everything off. The anti-inflammatories are going to be number one.

The beta agonists are going to be number 2 and the antimuscarinic. Sir going to be number three. Okay? So we’ll get into the pharmacology of that. Let’s talk about the pathophysiology about perhaps clinically where this inflammation may be coming from things that can trigger problems in our Airways based on a number of things, first of all, because of the stuff that we breathe in. So that’s a trigger the air that we breathe.

And sometimes stuff in the stomach can reflux up and irritate the airway that continues up. So another thing that can cause this is gastroesophageal reflux disease that can sometimes cause symptoms of asthma. Now, if we go up here, we have the nasal passageway. Sometimes you can have allergies that drip down and cause irritation in there. So then post nasal drip can cause asthmatic symptoms.

Them’s. And so, whenever you see a patient with asthma or you’re asked about on a test, you should think about these things as causing asthma. So what we call Cost variance asthma, post nasal drip and gastroesophageal reflux disease. Some of the other things that can contribute to all of these think about down feather pillows.

Pets in the bedroom.

These are places that you spend a good six seven, eight hours a day and could affect some of the treatment symptoms. So these are some of the things that by getting rid of, we might improve asthma. There’s also environmental things and things from work, for instance, from your occupation. There’s something called isothiocyanates.

Solvents. All of these things can buy breathing the men set off asthma exacerbations. There’s one other thing that I should make you aware that they might ask you on a test. They love to ask things that are uncommon in asthma. That could be very unique or make you think of something and there’s something called Samplers Triad

Where you see. Number one, aspirin sensitivity.

Nasal polyps, the key here is that they need to stop using aspirin and NSAID products and find an alternative, these patients, by the way, and we’ll talk about treatment. Also respond very well to leukotriene receptor antagonists, and we’ll talk about those. So just remember Samplers, try it in your patients with asthma. Ask them if they’ve had a history of aspirin, sensitivity, or if you’ve noticed that their symptoms have gotten worse after taking aspirin or NSAIDs, and then ask them about a history of sign.

Has problems maybe even sinus surgery or nasal polyps. Okay, will join us for part two where we talked about the diagnosis and the treatment of asthma.