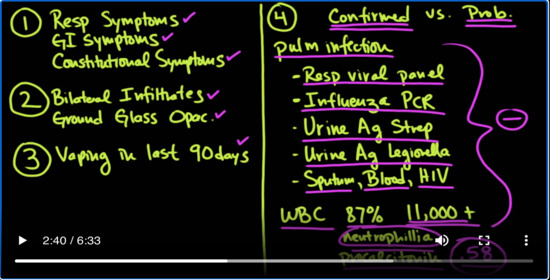 Glass opacification or dense infiltrates bilaterally dependently and they Vaped in the last 90 days. Then you’ve got to be thinking about this possible situation with the epidemic that we’ve been talking about. And then the question is is this confirmed versus probable. So what you really have to do at that point is you’ve got a rule out pulmonary infection and the way you would do that of course is by getting some of your lab tests that you would normally get you want to get a respiratory.

Viral panel these are panels where you can check for very small amounts of the viral DNA in the patient’s nasal swab that will also check for the influenza PCR. This is particularly important. If you’re looking at cases between October and April because that’s when the flu is rampant. You also want to get a urine antigen for strep and a urine antigen for Legionella. Also as we mentioned sputum cultures blood cultures also check for

Ivy remember though it’s going to be a little bit problematic because your WBC is in the study 87 percent of them had greater than 11,000. Some of them were as high as 20,000 and there was definitely a neutrophil yet which would lead you to believe that perhaps these patients actually have bacterial infections. What’s even more problematic is that the procalcitonin levels in these patients on average were .58 and

Ending on where those tests are being done for the most part anything less than Point 1 is negative. So you’re going to have a positive procalcitonin in a lot of these patients. You’re going to have neutrophilia and your white counts going to be elevated. And so you’re going to suspect that this patients has an ammonia. So even if they do have a pneumonia, but you don’t feel like the patient’s pneumonia adequately explains the severity of their illness. You can consider that as a probable case, but if

All of this is all negative and you have everything over here on the left hand side the CDC and also for the intended purposes of the study considered this as a confirmed case, and now finally we come to treatment which is problematic because we have no randomized control trials. This is a new epidemic. This is a new problem. We don’t know what’s really working here. And so there are a no

Official Guidelines and so this is an important point that I want to make is that we really can’t have any recommendations and that was not the purpose of this paper that was published in the New England Journal of Medicine. However, they were able to see what treatments were used. And also the fact that only one person died in the study. So that was about two percent of the study. So in looking over what they did for these patients

and if you look at the study, you’ll see that of course supportive care is Big right? So the patient’s stops vaping they stop using e-cigarettes and you support them during this process with supplemental oxygen with sometimes even ventilator so they have to be intubated and for those people who are mechanically ventilated. It was seen in some of the case studies in that report that they were treated as if they had a RDS and because some of them actually met the criteria the Berlin

Terior for AR DS which is a severe AR DS which would be a PF ratio of less than 100 model would be less than 200 and then mild would be less than 300 and so the treatment and those situations would be low tidal volumes. And so you’re looking at starting out at eight MLS per kilogram ideal body weight and then going down to a target of six and some of these cases proning them. I think there’s a study out of France that show that if the PF ratio was less than a hundred and fifty.

That the patient benefited from proning also paralysis some Studies have shown that paralysis early on can improve in survival. And so treating the patients like we would normally treat them regardless of the cause is still something that is worthwhile doing the interesting point though is what a lot of people have been finding some success with although it’s anecdotal. And again, let me re-emphasize that we have no randomized control trials.

Doesn’t have an overwhelming infection and that is sometimes problematic in a patient who has a high white count and maybe has a band emia or maybe has a neutrophil Lea. So this is something that has to be entertained with some thought before you just go rushing in there with high-dose steroids. Nevertheless these patients who did well, we’re started on high-dose steroids and that’s something that is notable and you can check that out in the article. Then the other question is whether or not

not to give antibiotics and of course, you’ve got to be pretty confident that there is no infection. But if you are going to start antibiotics because you might think that there’s an infection of course follow the guidelines for your area again remembering that you want to start broad-spectrum antibiotics that will cover for the most likely causes of pneumonia in your patient population. So this is something that is evolving and hopefully we’ll be able to get more information about this epidemic of e-cigarettes.

And vaping currently. Thanks for joining us.