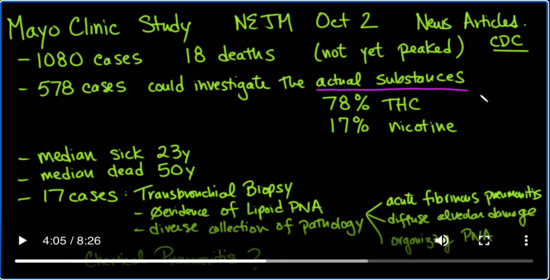 Welcome to another make cram lecture will get a give you an update on The Vaping epidemic that is going on right now and earlier. We created two videos which were based on the publication in the September 6 New England Journal of Medicine on some retrospective reviews of the cases that were published their the first video which will give you a link to and the second video which we will also give you a link to in addition to a link to

to the original New England Journal of Medicine article talked about the epidemiology the symptoms the signs and the treatment and to basically review the results of those articles and videos is number one. There was no clear cause that they could find for the epidemic there was a wide variety and diverse number of instruments. There was a diverse amount and types of substances that were used. There was THC. There was CBD oil there.

Nicotine and they really couldn’t report on a clear cause in the New England Journal of Medicine. The other thing that they found was the meeting age of people that were affected were 19. These were young people. The other thing that was interesting was that they found in this article not only the respiratory symptoms that you would anticipate having but also abdominal symptoms, which you would not anticipate this in addition to fevers and chills and when I say

Nominal symptoms. I’m talking about nausea vomiting and abdominal pain even diarrhea. The other thing that we went into in the second video was treatment and we talked about the potential usefulness of steroids, but we don’t have randomized placebo-controlled trials. So that was an interesting video and we got a lot of comments regarding that video.

So the comments went in approximately three different veins the first one was being the result of Black Market. A lot of the commenters felt that the fact that this stuff was on the black market that it was primarily th see that there was Vitamin E oil on there. And this was causing lipoid pneumonia and very strong comments with regard to that. In fact, there were some comments in the second vein here of those that said that they only smoke nicotine or Vaped nicotine.

We’re lying. So the 17% that was reported in the New England Journal of Medicine as vaping only nicotine were lying and it was felt because a lot of these states have THC as being illegal, they would not admit to using THC and therefore would say strictly that they were only using nicotine a third comment that we saw quite a bit of was this thing about big tobacco benefiting from all of the bad press for Vaping because people would go back to smoking cigarettes.

Well, there’s been some new information updated information that was just recently published and I think you would find it very interesting and it may shed some light onto what is going on. So, let’s get to that. Well, the following is from a Mayo Clinic study that was published in the New England Journal of Medicine on October 2nd 2019. Also some news articles and quotes from the CDC on that date of October 2nd and the following date October 3rd, where we are at that point.

Point is 1080 cases either confirmed or probable and 18 deaths in 48 states. And what the CDC is saying is that it has not yet peaked in other words. We’re not seeing it dwindling off its Rising steadily. There are about five hundred and seventy eight cases the CDC says and they’ve got about a hundred or so doctors investigators working on this right now 578 cases where they could investigate the actual substance.

Says that these patients were actually using and so I stress this is not purely on recall but them handing over the devices that they were using when they became ill and what the CDC is saying is that the majority of them are THC. We don’t know if they’re black market or not. But 78% of them are THC and they’re still maintaining that about 17 percent of them are nicotine only now what they’re noticing is that those that are

Are sick are still pretty young in terms of the median age about 23 years of age. But those that are dying tend to be of an older age. So about 50 is the median of those that have died of those 18 deaths that they’ve investigated now. What’s interesting what I want to stress is this Mayo Clinic study that was published in the New England Journal of Medicine on October 2nd, and of course, we’ll have the link to that study as well where they were able to take 17 cases where they did bronchoscopy. That’s where they put.

A tube down someone’s lung and they’re actually able to biopsy through the tubes into the lung tissue itself. So this is known as a trans Bronco biopsy. This is where you’re able to get a piece of the alveolus which is where the air sacs are and you can analyze these and get a better understanding about what it is that’s going on in these cases and the pathology slides are published there in the article itself and a letter and here’s the interesting thing. Is that shows no evidence of

Boyd pneumonia, which is what we thought this might have been as we initially suggested here at the beginning of this epidemic. The thought was that this was Vitamin E oil. It was in THC people were vaping it was causing a lipoid pneumonia. They’re not seeing that in these 17 cases that were biopsied and evaluated instead. What the Pathologists are seeing is this diverse collection of pathology typically falling into three categories acute fibrinous pneumocytes.

Itís diffuse alveolar damage and organizing pneumonia. And so what they’re proposing is that there’s actually some sort of a chemical pneumonitis again, they don’t know exactly which substance this is that’s causing this and so while we do have some new information, we don’t have the Smoking Gun. No pun intended. So regarding the company’s Altria is the major tobacco company in the United States and a subsidiary of ultra is

Philip Morris United States of America or USA which markets and makes Marlboro. Now another subsidy of ultra is US smokeless. Tobacco company incorporated which also makes dipping tobacco and chewing tobacco now Altria which used to be known as Philip Morris apparently spun off Philip Morris International which has been given exclusive marketing rights to sell Marlboro internationally. Now the other thing that’s interesting is that

Philip Morris International also has a product known as I cross or IQ OS which is basically a product that instead of igniting tobacco and burning it at 600 plus degrees. It only Heats it up to 350. And so there is a vapor that comes off the tobacco which has nicotine in it. It’s kind of like a vapor an alternative method so you can see here that the tobacco companies or big tobacco companies as you would say, I’ve already gotten into alternative modes of Nick.

The revenue loss is going to be directly impacting. I’ll treat so I’ll Tria is also considering merging with Philip Morris International. Those are still talks that are underway at this point. So you can see here. The picture is not discrete and independent as one may think but in fact there’s a lot of investing at multiple different levels in these different companies, please join us for further updates on this issue with vaping and we will get those out to you as soon as

as we can report those. Thanks for joining us.