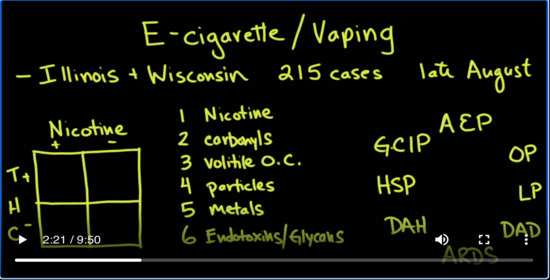 Welcome to another MedCram lecture. We’re going to talk about e-cigarettes and vaping and what’s been going on recently in terms of the epidemic. So e-cigarettes vaping was something that was introduced approximately in 2007 and it was supposed to be an alternative to cigarette smoking. It was a way for people to stop cigarettes, but still get the nicotine and be able to vape it or to vaporize it and inhale it and get the nicotine that way without all of of the chemicals that are associated with cigarette smoking. Well since that time it’s become very popular with high school students were up to 20 percent of high school students have vaped or are vaping as opposed to just three percent of adults. And that’s going to play a role in what we see in the epidemiology of this recent outbreak of acute respiratory failure in people who use e-cigarettes and vaping. So we’re going to talk more about that.

So the three big categories that are in vaping is number one, of course nicotine, which is what its original purpose was. But number two, you can also vape THC and CBD which is tetrahydrocannabinol or cannabidiol as well. And that’s the THC CBD or in addition to that also butane, hash oils otherwise known as dabs. So those three big things are being used in vapes and that is what makes it a bit complicated in trying to figure out what exactly is the problem and where exactly is the problem coming from because these machines are so diverse and the things that are being put into them are so diverse.

So let’s get into a little bit of that. Okay, in terms of the epidemic that we see here basically in late August of 2019. We saw some cases starting out especially in Illinois and Wisconsin about 250 in cases and that caused the public health department in those two states to go back and look and see what was going on. And they looked back at emergency room visits with the symptoms of respiratory failure, respiratory distress that wasn’t explained by a better diagnosis. And what they found was that these patients had e-cigarette use or vaping in the previous few weeks months and they actually look back as far as 90 days.

What they found was quite interesting actually in terms of whether or not they use nicotine or THC  in terms of what they were vaping. They found of course that whether you looked at nicotine yes or no, THC yes or no, there was nobody that use neither nicotine or THC. So that’s a big X there. But in those that just used THC and not nicotine that was about 37 percent and then those that use nicotine but not THC that was only about 17 percent. And so about 46% use both. But you can see here that it seemed to be tied more to THC. But there were some people that had used just nicotine only.

And the question is where is this all coming from? Well, if you look and see in e-cigarettes liquid, what are the main contents? There’s nicotine which of course is there for those people who are trying to get nicotine in an alternative way from smoking. There are carbonyls there are volatile organic compounds. There’s particles. There’s metals. And kind of gross there are endotoxins and glycans, endotoxins being from bacteria and glycans being from fungus.

So you can see already that there are many possible suspects in terms of what is it in the e-cigarette liquid that could be causing the problem. Further complicating this is the fact that the reaction of the lung to whatever it is that’s in the solution is not exactly the same because there have been reported in many different types of patterns. For instance, there’s been a cute eosinophilic pneumonia. Okay, so there’s also been organizing pneumonia. There’s also lipoid pneumonia, diffuse alveolar damage, ARDS which is acute respiratory distress syndrome. There’s diffuse alveolar hemorrhage, there’s hypersensitivity pneumonitis and giant cell interstitial pneumonitis. And all of these have been associated with vaping.

So needless to say the investigation is still ongoing, but I want to draw your attention to a couple of articles that were recently published that shed some light on it and gives valuable information to healthcare providers when treating these kind of patients.

This article was published on September 6 2019 in the New England Journal of Medicine and this article went back did research retrospectively looked at patients that were admitted to the hospital and found out to have e-cigarette or vaping related lung disease to see what the symptoms were of those patients so they could better characterize them. The other article that you can see as well that is in the same journal is this editorial that was published by David.C. Cristiani. It’s also very helpful. I will put the links to both of these articles in the description below.

So in the article what they did was they took the present time, which was around July August of 2019 at the time and then they looked back all the way to January 1st of 2018 looking for admission criteria that met the type of syndrome that they were looking for. And at each of these points they wanted to see whether or not there was an increase in the number of patients that were being admitted with these kind of symptoms. And what they found was that for instance in July of 2019 there was twice as many people coming to the emergency room as there were in the same months a year earlier. And so all of these data points, they looked back 90 days to see whether or not the patient had a history of e-cigarette use to see what the kind of symptoms were, what their course was, what the infiltrates were. To learn some other characteristics that might be helpful for you and I to take care of these patients in the hospital.

So let’s look at the data and see what they found. They found that there was about 53 patients that they could actually go back and look at after they excluded a few because they couldn’t completely go through all the records. Overwhelmingly the patients were male, 83%. And the average age was actually 19 which is important because the range was actually 16-53 which tells you that there were a lot of people down here towards the bottom range towards the 16, 17, 18, 19 year-olds. Those are the people that are using vapes and e-cigarettes the most. How many people ended up getting admitted and actually on ventilators? So 94% were hospitalized and 32% actually were severe enough to get on the ventilator and that’s a significant amount.

The thing that becomes a little bit confusing is the third and last leg here. Those are the Constitutional symptoms. Constitutional just basically means fevers, night sweats chills, something like that. And this could be confusing because this may make you think that the patient actually has an infection which they don’t seem to think is going on with this respiratory illness associated with vaping.

Now the question might be what will the chest X-ray look like. And in almost all the cases the chest x-ray look very similar to this with bilateral infiltrative changes that were diffuse. What you might see on a CT scan are these gravity dependent bilateral infiltrates. In this case, they’re quite dense. In addition to that in the upper lobes are here in the more non-dependent areas you might see this ground glass opacification. And that’s the keyword that you want to look for is on CT is if you’re seeing ground glass opacification in some cases it might actually even spare the periphery of the lung, subpleural sparing it’s known as. In this case it doesn’t do it as much but that is sometimes a sign of alveolar hemorrhage.