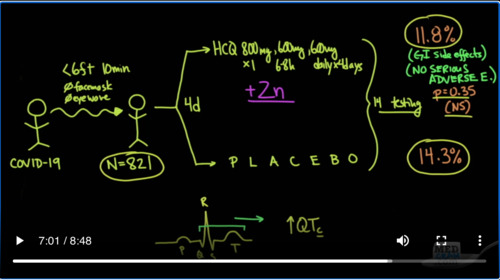 Update 81: New Data on Hydroxychloroquine Side Effects and Prevention of COVID-19

A lot of you have wondered about whether or not we’re going to get a second phase in the wintertime and I keep saying let’s look at Australia. It’s not a hundred percent. But so far as Australia heads into winter, we have not seen a recurrence as yet. Cases in Brazil have still not yet come down.

Cases in Russia seem to have leveled off somewhat and are coming down slowly.

If we look at the United States as a whole, it seems to be slowly trending down.

And that might be driven by the fact that in New York state, the number of cases have really taken a fall and stayed low.

However in California, we have never really seen a drop in cases, although in terms of deaths there seems to be a mild diminution.

The state of Texas has not really fallen in terms of numbers as well.

And in Florida recently, the number of cases are about as high as they’ve ever been.

I wanted to highlight a couple of websites that are going to be very helpful in the coming months. And this one is “covid-trials.org” and what this is showing you is a world map of over 1,400 different trials that are selected and their country of origin. And here on the right side, you can select what treatment. So we could click on hydroxychloroquine, we could click on plasma-based

This is one called “raps.org” and it’s under news and articles, COVID-19 vaccine tracker.

We talked about this one before but I just wanted to highlight it once again. (It) shows basically the candidates, the sponsor, the trial phase, the institution and the funding and if you click on positive, you’ll see that there is a description about that vaccine trial.

And speaking of drug trials, I wanted to talk to you about this paper that was published in the New England Journal of Medicine on June 3rd, just a few days ago, titled “A Randomized Trial of Hydroxychloroquine as Postexposure Prophylaxis for COVID-19”.

So what they did was they took patients who have been exposed to somebody with COVID-19.

And they made a definition for that. So they were within 6 feet for at least 10 minutes without wearing a facemask and or eyework protection.

Now I should say here that even though they gave it for a total of about 5 days, we know from pharmacokinetics that the medication actually stays in the lung for about 5 to 10 days. Now the other arm of this was simply just placebo.

And at the end of those days, around 14 days thereabouts, they did a 10 point which was testing for COVID. What they found was that in the intervention group, 11.8% of the people came down positive for COVID-19. And in the placebo group, it was a little bit higher at 14.3% but the p-value which checks to see whether or not the difference is due to chance alone,

was 0.35, meaning that because it was greater than 0.05, this was not statistically significant.

Now you should note that in the intervention arm, there was a significant increase in GI side effects. But interestingly, there were no serious adverse effects.

And of course, this includes the much-feared cardiac arrhythmias. And for those who don’t know, when an EKG is looked at, there is a P wave, Q, R, S, and then a T wave. And what can happen when you take certain types of medications, medications that prolong the QT interval by making it go longer, it can actually cause cardiac arrhythmias and that’s what we call a medication that can cause

a prolonged or increased QTc. Now the C stands for “corrected” because this timing here has to be corrected for the speed at which the heart rate is going. And if medications that prolong the QTc are stacked up on each other, for instance like hydroxychloroquine is one of those, and it’s added to azithromyzin which is another one that can do that, or it’s added to, for instance, Amiodarone or Diflucan. all of these can increase

The QTc. So what’s the problem if that happens? Well, you could get cardiac arrhythmias and we’ll talk about that at the end.

But before we do, let’s talk a little bit about this study. I think that looking at the study, there seems to be a slight decrease in the number of people that come down with coronavirus or COVID-19. But you would think that there would be a statistically significant difference when you have this many people enrolled in the study. And so I don’t know if it really can be considered a problem with the power of

the study, in other words, there wasn’t enough people enrolled in the study. because if you need that many people to show a statistically significant difference, then there’s probably not a very big clinical significant difference. I’m sure I’m not alone in suggesting that perhaps next time they do this kind of a study, it would be interesting to see what would happen if they added zinc to this arm. As there seems to be some interest in the fact that at least in vitro, hydroxychloroquine acts as

a zinc ionophore. And at least in vitro, zinc inhibits coronavirus RNA-dependent RNA-polymerase. There’s also the study that we talked about in update 71, of course it’s a retrospective study that seems to show that when hydroxychloroquine is given with zinc, that arm was associated with a decreased mortality. But as we said in our live stream yesterday, retrospective studies

can only really give you hypotheses to test. And in this case, I would suggest that a good hypothesis to test would be whether or not the addition of zinc to hydroxychloroquine would actually result in a benefit. I think the other thing that this study shows us is if you’re ever in a situation where you have a high risk exposure, you can kind of see what would happen if you do nothing, what your chances are of coming down with coronavirus the

Okay, I wanted to show you what an EKG looks like of somebody who has a prolonged QTC. And here’s a pretty classic example. You can see here, here is a P wave and then there is a QRS complex and then the T wave starts to come out way out here. And what you see here is an, what we call, an R on top of the T. Now when the T wave goes so far out that the next R wave happens on top of that T wave, t

hat’s called an “R on T” phenomenon and you go into this very very bad ventricular arrhythmia, which if left can be fatal. It’s probably enough to know that you’ve got to watch out for medications that can prolong that QT interval.

Thanks for joining us.