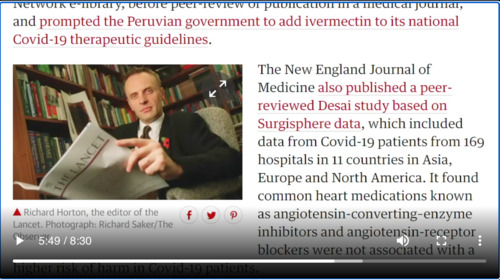 And this is going to be a juicy update because there is a bombshell of interesting news over the last couple of days about studies, about data collection and about retractions of big studies in big-name journals.

Each of these drug regimens was associated with decrease in-hospital survival and an increased frequency of ventricular arrhythmias when used for treatment of COVID-19.” And this came out of Harvard. The Brigham and Women’s Hospital is in Boston.

And of course, we’re going to give you a link in the description below to this article once again. But notice that the second author on this article is a surgeon by the name of Sapan S Desai. Note this is a different Dr. Desai then Dr. Rishi Desai from Osmosis who we’ve done interviews with before. This is Dr. Sapan Desai and he is a founder of a company called Surgisphere.

Well, apparently there’s been some investigative reporting on this company called Surgisphere. And apparently it doesn’t have a very large footprint and it’s kind of unknown.

But before we get to that, we have to look and see what was the fallout of that Lancet article because major decisions in countries were made as a result, not the least of which was that the World Health Organization put their prospective study of hydroxychloroquine on hold because of the outcome of that research article.

And the reason why that happened was because of some of the data that was coming out. It seemed as though there were more deaths in Australia from this data set than was actually published in terms of the total deaths related to COVID-19. And so something didn’t go together with that data set. It was later explained by Surgisphere that it was because of a misplaced hospital data set. Instead of it being in Australia, it was placed in Asia,

and that might have been the reason. But more research into this led to some other issues. Now, we won’t talk much about it. But just to note that there was also a New England Journal of Medicine article on ACE inhibitors and ARBs that was also published and it was based on data sets that were obtained by Surgisphere as well. Anyhow because of these inconsistencies, the authors of these papers that were published in both the Lancet and the New England Journal of Medicine asked Surgisphere

for the entire data set so they could have a third-party independently verify the numbers that they were getting. Well, Surgisphere refused. And as a result of that, the authors themselves of these papers recommended to the Lancet and the New England Journal of Medicine to have these papers retracted. That’s correct. The Lancet paper, the hydroxychloroquine Lancet paper is retracted and the New England Journal of Medicine also, a retraction.

And here is the comment from the retraction. And basically it summarizes what I’ve just told you.

In addition to this, there was another paper that was co-authored by Desai that found that Ivermectin, the drug that we’ve talked about at MedCram is an antiparasite medication and that it reduced death rates in severely ill COVID-19 patients. And this was published online in the Social Science Research Network E-library before peer review or publication in a medical journal. And it actually caused the Peruvian government to add Ivermectin to its national COVID-19 therapeutic guidelines.

And as we just mentioned here, the Guardian says that the New England Journal of Medicine also published a peer-reviewed Desai study based on Surgisphere which included data from COVID-19 patients from 169 hospitals in 11 countries in Asia, Europe and North America. It found common heart medications known as angiotensin-converting-enzyme Inhibitors and angiotensin receptor blockers were not associated with higher risk of harm and COVID-19 patients. And we reported that here at MedCram as well. So this very

well may throw that data into question. And so if you look at the actions that have been taken as a consequence of the research that has been published in very well-documented peer-reviewed journals based on Sketchy data, Apparently. It makes you wonder and look at this as a re-eval.

And so already, at a press conference on Wednesday of this week, the WHO announced that it would resume its global trial of hydroxychloroquine after its data safety monitoring committee found that there was no increased risk of death for COVID patients who are taking it. In fact that WHO director-general Tedros Adhanom Ghebreyesus said that all parts of the solidarity trial which is investigating the number of potential drug treatments would go ahead. So far more than 3,500 patients have been recruited to the trial in 35

So what they’re saying happen here is that Surgisphere was supposedly able to network electronic medical records in multiple countries at multiple hospitals and was able to have them communicate to them so that they were able to make these data available to these authors to do these studies. What’s not clear to investigators is exactly how they were able to do that when Surgisphere has such a small footprint.

And apparently this company is able to get D-identified information. So they’re able to make study data available to investigators, but it’s not exactly clear how this is happening. And this Guardian article goes into more details, which of course we’ll give a link to in the description below.

I particularly like the paragraph at the end of the Guardian article here it says, “The very serious concerns being raised about the validity of the papers by Mehra et al need to be recognized and actioned urgently, and ought to bring about serious reflection on whether the quality of editorial and peer review during the pandemic has been adequate. Scientific publication must above all be rigorous and honest. In an emergency, these values are needed more than ever.” And I totally agree.

If you like some more information on this news story, we’ve also included a stat print titled “Lancet, New England Journal retract COVID-19 studies, including one that raised safety concerns about malaria drugs”. And then of course to round it out, we’ll go to Surgisphere’s website itself where they talk about their response to widespread reaction to recent Lancet article on hydroxychloroquine and read their response to all of these.

I also want to let you know that we will be answering your questions on a live stream on Sunday. We’re planning on doing that around 6 p.m. Pacific standard time. So join us on our channel for a live stream. Thanks for joining us.