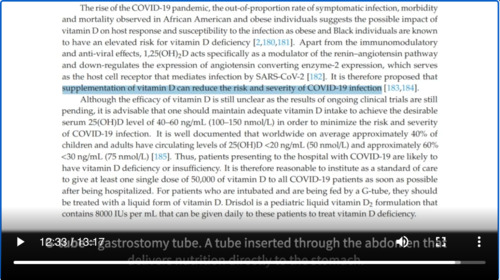 Medcram.com want another medcram covid-19 update and I wanted to make this short video because I found some very interesting information that I want to pass along to you. So we’re going to jump right to it. And so if you’re looking for a great review article on vitamin D and general human health, this is the article that you’re going to want and it also has an update about covid-19 and some recommendations. So we’ve talked about vitamin D a lot.

You can see some of our previous videos if you’d like to vitamin D is almost like a hormone. It is a lipid soluble vitamin. It is derived from a cholesterol derivative and it requires ultraviolet radiation to convert the cholesterol derivative into the 25 hydroxy vitamin D from there the body metabolizes into 125 dihydroxyvitamin D into its active form. But many of these things are actually used so back to this article it has almost

200 references and it hits on multiple topics, which is very germane because just last week there was a paper published that showed a reduction in all cause mortality associated with vitamin D levels 45 to 60 and here’s that article titled vitamin D status and risk of all-cause and cause specific mortality in a large cohort results from the UK biobank.

And what were the results after a median follow-up of about nine years over 10,000 deaths occurred including 18.1 percent due to cardiovascular disease 56% due to cancer the multivariate analysis revealed non linear inverse associations with a decrease in mortality risk appearing to level off at 60 Nana moles per liter of 25 hydroxy vitamin D for all cause and cardiovascular deaths and at 45 an animal’s.

Five hydroxy vitamin D concentrations are nonlinearly associated with lower risk of all-cause cardiovascular disease and cancer mortality the thresholds of 45 to 60 nanomoles per liter might represent an intervention Target to reduce overall risk of premature death which needs further confirmation and large clinical trials. So what they’re saying here is this is a retrospective study a very large retrospective study looking at a number of patients as it turns out over 365.

Thousand participants over almost 10 years where they looked at these patients and they were able to see this difference in vitamin D levels back to our article if we look at this will see that the article actually breaks down an introduction on vitamin D as we’ve talked about. What are the causes and Associated diseases of vitamin D the physiology of vitamin D, which I’m not going to get into at this point. It’s skeletal effects and healthy serum vitamin D and

five hydroxylamine vitamin D levels and then it gets into stuff. That’s very interesting for instance the effects of vitamin D on innate immunity and they mention here that it also exhibits direct antiviral activities against many respiratory viruses by disrupting viral envelopes and altering viability of host target cells. This process is especially robust in granulomatous inflammation such as TB fungal infections sarcoidosis and some lymphoma.

They also talk about the different types of cell types B cells th one th17 it cetera and antigen presenting cells and natural killer cells, but what I became very interested in because of what we’ve been talking about is this section on endothelial function and Vascular permeability now take a look at this a number of experimental Studies have shown that vitamin D and its metabolites modulate endothelial function and Vascular permeability.

Via multiple genomic and extra genomic Pathways what they mean there is that vitamin D may actually directly cause something or it may upregulate the promoter for transcription of certain genes and they found this that 25 hydroxy vitamin D3 and 125 dihydroxyvitamin D 3 non-genomic Lee meaning directly stabilized vascular endothelium and that vitamin D3 normally circulating at about a hundred times higher level than the 125 dihydroxyvitamin.

A lot of people have been talking about nitric oxide inhalation and whether or not this could enable and help patients with covid-19. Well Studies have shown that 125 dihydroxyvitamin D is a transcriptional regulator of and the filial nitric oxide synthase, which causes upregulation of Enos gene expression and increases endothelial production of nitric oxide. So here’s a connection between nitric oxide and vitamin D three levels.

Furthermore they notice that this effect of 125 dihydroxyvitamin D 3 occurred within a minute of administrating the compound implying that it wasn’t being used in terms of transcriptional modification by a promoter which would take a lot more time. There’s a direct it seems component to the 125 dihydroxyvitamin D and the activation of nitric oxide. So what the summation regarding endothelium taken together, it is evident that vitamin.

Andy and its metabolites exert pleo Tropic effects on the vascular endothelium that are protective against vascular dysfunction and tissue injury as a result of local and systemic inflammation, this is exactly what we want to have in a patient with covid-19 if our hypothesis is correct, we’ve been talking about vaccines and Immunity and antibodies well vitamin D has an effect on adaptive immunity. It has an effect on T lymphocytes. There is some

About whether or not helper T cells and memory T-cells remember this infection while there is an effect of vitamin D on that. There’s also an effect on the B lymphocytes and these B lymphocytes give rise to plasma cells and it’s these plasma cells that give rise to antibodies. And then this review article goes into a number of other things including immune related diseases like psoriasis like type 1 diabetes like multiple sclerosis.

Axis, like inflammatory bowel diseases like Crohn’s ulcerative colitis Etc and all shows very good effects also talks about rheumatoid arthritis and even tuberculosis talks about sepsis and critical illness in terms of randomized controlled trials. And then of course what we want to learn about which is respiratory viral infections, and yes covid-19. Remember this paper was published literally in the last day or so.

So the question for those that say well do we actually have any randomized controlled trials that show that vitamin D Works in reducing acute respiratory infections. Well, here we go. One of the proposed explanations is that the seasonal outbreak could be due to a seasonal variation in circulating levels of 25 hydroxy D which reaches the lowest levels in the winter several studies have supported this hypothesis as they reported the independent association between low-level Sarah.

25 hydroxy vitamin D and the incidence and severity of respiratory tract infections in children and adults a prospective cohort study in healthy adults living in New England showed a two-fold reduction in the risk of developing acute respiratory tract infections and those with serum 25 hydroxy vitamin D levels of 38 nanograms per milliliter, which is 95 nanomoles per liter or more.

From those children that were aged two years unless were 1.7 Times Higher likelihood of requiring hospitalization for an acute respiratory tract infection. So what is it that vitamin D is proposed to be doing it seems as though that when respiratory viruses enter the respiratory epithelium via the specific entry receptors, whether it be a stew or what have you it causes cellular and tissue damages and triggers the

The innate and adaptive immune systems both which then result in Airway and systemic inflammation and in severe cases life-threatening sepsis or acute respiratory distress syndrome, 125 dihydroxyvitamin D the active form of vitamin D. Not only has antiviral activities, but it also modulates inflammatory responses to viral infections by stimulating catholicity release modulation of a toll-like receptor expression and natural killer cell function as well as suppressing overexpression of

Pro inflammatory cytokines and as we reported here at medcram a recent meta-analysis of 25 randomized controlled trials showed that supplementation of vitamin D2 or D3 can protect against the development of acute respiratory tract infections compared to Placebo. They also mentioned in this paper that symptomatic infection morbidity and mortality observed in African-Americans and obese individual suggest the possible impact of vitamin D on the host response and

Susceptibility to infection as obese and black individuals are known to have an elevated risk for vitamin D deficiency and they mention that it has been proposed that supplementation of vitamin D can reduce the risk and severity of covid-19 infection. There’s a number of references to that. Then the authors go out on a limb and suggest the following they say although the efficacy of vitamin D is still unclear as the results of ongoing clinical trials are still pending. It is advisable that one should maintain

nanograms per milliliter or 50 nanomoles per liter and approximately 60% have less than 30 nanograms per milliliter or 75 nanomoles per liter. Thus patients presenting to the hospital with covid-19 are likely to have a vitamin D deficiency or insufficiency. It is therefore reasonable to Institute as a standard of care to give at least one single dose of 50,000 units of vitamin D2 all covid-19 patients as

As possible after being hospitalized for patients who are intubated and are being fed by a G-tube. They should be treated with a liquid form of vitamin D. Drizz doll is a pediatric liquid vitamin D2 formulation that contains eight thousand international units per ml that can be given daily to these patients to treat vitamin D deficiency.

So I wanted to pass this along to you because I know a lot of you are interested in supplementation with vitamin D. And we’ve talked about it before I supplement myself with vitamin D. I always recommend all of you checking this out with your doctor. It is possible to overdose and vitamin D. So it’s very important that you confer with your doctor about vitamin D supplementation will provide links in the description below to this paper and also the paper talking about all cause mortality.

Being reduced. Thanks for joining us.