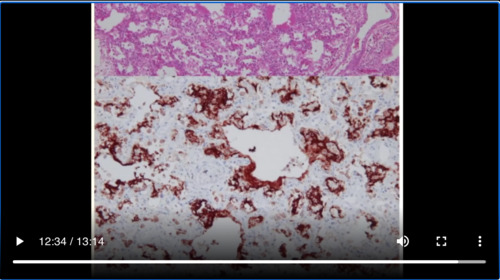 And we said that we would be looking at Australia but see if there’s a recurrence of COVID-19 because they’re headed into their winter right now. And there does not seem to be any resurgence of COVID-19 in Australia.

I wanted to talk a little bit more about this oxidative stress issue. And we talked about this super oxide which is the result of an electron being added to an oxygen molecule. And this super oxide is a bad actor something that increases oxidative of stress on the system and we have a number of systems in place, specifically catalase, superoxide dismutase and glutathione peroxidase. In addition to what’s not listed here is glucose-6-phosphate dehydrogenase. All of these systems are in place to minimize the oxidative stress of superoxide.

And as we discussed last time there seems to be certain minority and ethnic groups that are particularly predisposed to the negative effects of COVID-19.

The CDC here notes that a recent CDC MMWR report included race and ethnicity data from 580 patients hospitalized with lab-confirmed COVID-19 found that 45% of individuals for whom race or ethnicity data was available where white, compared to 55%t of individuals in the surrounding community. However, 33% of hospitalized patients were black compared to only 18% in the community.

And there are a number of things that were proposed as the possible reasons for this. And you can see those listed here living conditions work circumstances underlying health conditions and lower access to care. And of course what can be done. I was introduced to this paper by a physician in British Columbia who pointed it out to me very astutely that this may also give an explanation as to what is going on. This paper was published 16 years ago, so it’s definitely not new information, but it does shed light in this situation about what may be going on and Circulation is a very prestigious Journal.

And what essentially they did is they looked at the oxidative stress of cells and particularly in the endothelium both in vivo and in vitro. And they looked at these Nano sensors that were put into single human umbilical vein endothelial cells are these HUVECs. And they isolated them from African-Americans and Caucasians. And they let that ends on that we talked about which was NADPH-oxidase. And how much NO which is an important thing they have produced.

And as you can see here in whites versus blacks, there was much more NADPH-oxidase expressed in blacks than there were in whites.

Here’s a graph of what happens when a calcium ionophore is put into these vascular endothelial cells. And you can see here white is in A and black is in B. And here we can see that NO which is a very important substance for reducing the effects of oxidative stress peaks up to as high as 500nM whereas in Black the NO only goes up to about 300nM. In terms of superoxide which is the dangerous molecule that we see here in A it goes up to as high as almost 300nM whereas the superoxide goes up to as high as 600 and 700 here in B. So in conclusion, they found that they provided direct evidence that despite increasing eNOS protein level. And that is the protein that helps make NO reduce NO bioavailability and intact endothelial cells from blacks compared with whites is primarily due to increasedO2- production mediated by upregulated NADPH-oxidase activity followed by eNOS uncoupling.

The racial difference in the extent of eNOS on coupling is caused by excess ONOO- produced initially in the reaction between NO and NADPH-oxidase derive O2-. Compared with whites, the steady state of NO/O2-/ONOO- balance in the endothelial cells from blacks is kept closer to the redox state that have been documented in the endothelium-impaired function disorders. In other words, to more of the oxidized state.

And this article is helpful in explaining why that racial difference may be there with COVID-19. There seemed to be gender differences and also age differences as well. And if we can figure out why these things are then perhaps those secrets will tell us what we need to do in order to reduce mortality all across the board.

And I wanted to thank our viewers for sending that in.

The other thing that I wanted to talk about is Kawasaki disease, this has been in the news recently because cases in New York have quadrupled overnight. In terms of children between the ages of 5 and 10 generally speaking who look like you’re coming down with a syndrome very similar to Kawasaki disease. Interestingly in Kawasaki disease the blood vessels of the patient becomes inflamed something very similar what we’ve just been talking about. These patients in New York have high fevers, they have high heart rates and sometimes their blood pressures are low looking like they have sepsis.

I wanted to talk a little bit about Kawasaki disease itself first so we can learn a little bit about why this COVID-19 illness may be similar to Kawasaki disease. This is a paper that was published back in 2010 titled Kawasaki disease as a systemic vasculitis in childhood. And it says here in the abstract that Kawasaki disease is a disease of unknown etiology that most frequently affects infants and children under 5 years of age. Inflammation occurs in medium-sized muscular arteries throughout the body including the coronary artery being classified as a systemic vasculitis syndrome. Histopathological investigations of Kawasaki disease have mainly focused on the coronary artery because it is directly associated with the cause of death. However to identify the cause and pathology of Kawasaki disease, it is necessary to investigate lesions of whole organs. Thus, we attempted to review lesions in organs other than the heart and hypothesis of pathogenesis recently attracting attention.

And this is the part that I want to draw your attention to this hypothesis of pathogenesis recently attracting attention.

So they go through and they talk about the introduction what the diagnosis of Kawasaki disease is. And what the principal symptoms include 1) fever persisting for five days or more; 2)bilateral conjunctival congestion. This is very similar by the way to COVID-19. 3)changes in the lips and oral cavity reddening of the lips strawberry tongue, and diffuse infection of the oral and pharyngeal mucosa. By the way, if you look at these patients, their tongues are aptly named strawberry tongue because they look literally just like a strawberry with the dimples of the little seeds that you would see in a regular strawberry.

There’s also 5)changes of the peripheral extremities initial stage is reddening of the palms and soles. This is similar to what we’ve been seeing in COVID-19. And indurative edema, and the convalescent stage there’s membranous desquamation from the fingertips and 6)acute nonpareil in cervical lymphadenopathy. At least five of the above six items must be satisfied for a diagnosis of Kawasaki disease.

And they go through and they talk about how many patients per year there is seen with. However, we’re seeing a lot more of them right now. They talk about the systemic vascular lesions and they give a bunch of histological slides. The point that I found interesting of the article was here at the end pathogenic hypothesis recently attracting attention. And it’s because of their findings and I want to go over this because I found it very interesting. Rowley et al. observed that IgA plasma cells infiltrated vasculitis lesions with many monocytes/macrophages and CD8 T lymphocytes in autopsy cases of Kawasaki disease.

So these were IgA that’s a special type of antibody plasma cells. And instead of just infiltrating the vascular tissues, they went into the non vascular tissues. They have hypothesized that a pathogen, interestingly here probably a virus, which invades via the respiratory or digestive organs. Now remember this was published just some time ago specifically in 2010.

This virus invades the respiratory or digestive organs and it gets processed in the lymph apparatus in the organ, and there’s local B lymphocytes that differentiate into precursors of IgA plasma cells and then IgA promoting plasma cells reach not only the coronary artery in the heart muscle but also the other various organs throughout the body. So in other words what they’re describing is exactly what we’re seeing with the coronavirus it invades throught the lung or the GI and then this virus stimulates the body to make IgA through IgA plasma cells.

They go on to say that in addition to monocytes/macrophages in the vascular lesions that they see, a substance reactive with the antibody was present in the cytoplasm of bronchial ciliated epithelium cells. The cytoplasmic inclusion bodies in the bronchial epithelium could be identified by H&E staining that special type of staining that you do when you look under a microscope and observed as an electron-dense non-structured spheroid substance under the electron microscope. Analysis of the structure of the cytoplasmic inclusion body is underway.

So all of this to say that perhaps Kawasaki disease is a response to the body’s inflammation and immune system in response to fighting a virus. So it may not be surprising that we’re seeing an uptick of this as we’re seeing an uptick in the amount of patients with viral infections. And it also goes along with this condition is primarily according to the  hypothesize a vascular issue.

It’s also interesting to notice that in the acute phase of Kawasaki disease interstitial lung shadows appear in some cases. on autopsy, interstitial changes were observed in 4 of 13 patients who died on the 29-57th day of illness. And they say that histologically these changes correspond to diffuse alveolar damage(DAD), but there was no apparent correlation between pulmonary arteritis and the interstitial changes.

So it’s certainly possible as we can see here that Kawasaki disease which is a vasculitis spills over into a lung disease. But if we take COVID-19, which is predominantly many people say a lung disease there can be a cross reaction and it can cause a vascular disease as well.

So I found this article very interesting, especially for the fact that they are saying that Kawasaki disease may be instigated by the presence of a virus. And that is exactly what we’re seeing right now. We know COVID-19 comes from SARS-CoV-2 and we’re seeing many of these patients are behaving as though they have a tremendous vasculitis.