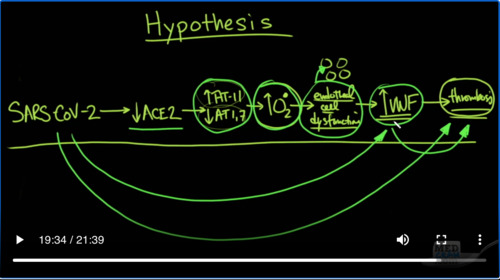 some undulation zsasz many of you correctly pointed out probably have to do with weekend reporting.

And those are markedly accentuated there in terms of the daily deaths.

For those of you who are more interested locally for where I work. This is in California, and we’ve got San Bernardino County and Riverside County with the number of new cases and new deaths yesterday this week. I am working in Riverside County and we are getting a steady stream of covid-19 patients being admitted to the hospital because of our short supply of negative pressure rooms were having to double up some of those patients in those rooms. We’re also not doing elective surgeries and a number of

Procedures are not going on. So even though the hospital is not overflowing with patients. It does seem to feel as though covid-19 is taking over the population of patients in the hospital. I wanted to continue our discussion about a stew and superoxide. So we said that superoxide was a bad thing that it caused endothelial dysfunction the endothelium being the lining of your vasculature and we said that there were a number of things that happen when a

And those are certain type of white blood cell now going on up here. We have Angiotensin one, which is converted to Angiotensin II through the ace enzyme and so ACE inhibitors inhibit Ace and what they do in addition to inhibiting Ace as they also tend to increase a stew which is the enzyme that we just talked about and a Arby’s will block the effect of Angiotensin II on the creation of superoxide, but a Arby’s may also increase

The amount of a stew the bottom line is understanding that when you have a SARS Cove to infection you’re going to get increased and the filial dysfunction. So, let’s see what happens when that occurs.

And we’ve looked at this paper before that was published almost 20 years ago out of Boston University School of Medicine at describes how all of these things come together with endothelial dysfunction and reactive oxygen species that we’ve talked about and if the you lose some of these protective mechanisms like superoxide dismutase has glutathione peroxidase has catalase and glucose-6-phosphate dehydrogenase, then you’re going to get increased oxidative stress.

And we’ve shown you those things here before here. We have an increase in superoxide and it takes superoxide dismutase to reduce it back to oxygen and hydrogen peroxide and then through glutathione peroxidase. You can reduce hydrogen peroxide back to water through catalase. You can reduce it back to oxygen and water and there’s ways of recharging all of these things for instance zinc copper and manganese is essential for superoxide dismutase and

What’s really important in normal? Endothelial function is this molecule called nitric oxide. In fact nitric oxide is how Angiotensin 1-7 works and so we’ve gone over this stuff before but the focus of today’s talk is thrombosis.

And so there are well-established papers taking endothelial dysfunction or ecd and connecting it with thrombosis. And it also connects it through the bioavailability of nitric oxide. It says here that deficiency of these enzymes like for instance. The superoxide dismutase is glutathione peroxidase has increased oxidative stress and nitric oxide in activation and as such can lead to endothelial cell

And so the question comes up, is there oxidative stress occurring in covid-19 infection and it seems almost assuredly that because of the fact that it affects the ace to receptor and enzyme there is going to be oxidative stress and the second question is how does it affect thrombosis? Well, there was a article that was published on April 15 20 20 in thrombosis research and it describes a

So you’re probably wondering what these Weeble palade bodies are their only found in endothelial cells and these tiny little bodies release these stringy type substances called Von Willebrand factor, which allows for coagulation and it allows platelets and the clot to form together when there’s so much destruction of the endothelial cell. This Von Willebrand factor is released in high concentrations into the blood.

What we see here, we believe in covid-19 the increase in plasma Von Willebrand factor is predictive of prothrombotic complications and multi-organ system failure associated with reduced survival in the context of severe inflammatory response syndrome type 2, diabetes mellitus stroke and other inflammatory cardiovascular disease States, this is exactly what we’re seeing in covid-19 this chapter focuses on the role of high circulating Von Willebrand factor in thrombotic and inflammatory.

Forces and remodels accordingly Atomic Force micro graphs have demonstrated at the single molecule level that under static conditions Von Willebrand factor assumes a globular confirmation. Whereas under high Shear flow Von Willebrand factor turns into an extended chain format that forms Ultra large strings to which platelets can bind and initiate clot formation. This is what we’re seeing in covid-19 at sites of vascular damage and when

shear stress is above 30,000 per second factor 8 is released from its carrier protein to provide factor eight to the coagulation Cascade. This is exactly what we saw in the article that described the covid-19 patient. We now realize that while Ultra large molecular weight Von Willebrand factor is essential for the normal human stasis this multi Merrick array should not become too large because it Alters the thrombotic propensity.

Now notice what they say here in conclusion, excessive levels of Highly prothrombotic and multi Merrick forms of Von Willebrand factor and or Adam TS 13 deficiency, and this atom TS deficiency has to do with the platelets, but specifically what Adam TS does is it Cleaves and cuts up Von Willebrand factor and believe it or not. It’s a zinc containing metalia protease enzyme and so essentially Adams

Yes reduces the effectiveness of Von Willebrand factor, but this is a unifying pathological mechanism linking inflammation oxidative stress and thrombosis.

What about is going to cause endothelial cell dysfunction?

And the filial cell dysfunction leads to an increase in Von Willebrand’s factor, which eventually leads to thrombosis.

This is happening in patients with covid-19. But it seems very likely that this is the case. Let’s take a look at some more data.

You may remember back in March of 2020. There was some stir about the different blood types and whether or not the blood types would lead to a prognosis in terms of getting the covid-19 infection hospitalization or even death.

This is the study and it actually came out of China and let’s take a look at some of the numbers that they found in one of the studies. They simply looked at the general population in a community.

And it looked at type a b a b and O and they found it in the population of 3000 694 32% were type. A 25% were tight be nine percent were type A B and 34% were typo. Then it looked at those that were admitted to the hospital with covid-19. And so these are covid-19 patients that are

Is it open not just positive but sick enough to actually be in the hospital and what they noticed was that a went from 32 to 38 percent be went to 26% a be went to 10% But oh went to 26 percent. There was a drop here statistically significantly in type O, then they looked at those that had actually died.

And these were in 206 patients the covid patients that were positive were 1775. So in those that died 41 percent were type a 24 percent were tight be nine percent type A B and 25% were typo again statistically significantly lower and they looked at several other populations in this study and it held true.

Across-the-board. In fact, they also felt that type O blood actually help in terms of reducing the actual infection or entry of the virus into the cells because of antibodies.

Now key point this paper at the time that it came out was not peer-reviewed. And as far as I know it’s still has not been peer-reviewed. If somebody has information on that, I’d certainly love to hear it. We could also do some peer review on it here. But what I find really interesting is this peer-reviewed article from 2007, which clearly shows that there are a number of relationships between ABO blood group and Von Willebrand factor levels. Yes the same Von Willebrand factor levels that we say

In the article, it states very specifically that several studies have documented the influence of ABO blood groups on plasma Von Willebrand factor levels in a large twin study. They found that 66% of the total variation in plasma Von Willebrand factor levels was genetically determined and that 30% of this genetic component was explained by the ABO blood group other Studies have consistently reported that and here it is group O subjects have lower plasma.

Von Willebrand levels then nan-oh individuals. So the question is is this just a coincidence because it very well could be or is it possible that Grupo subjects have less of an increase in Von Willebrand factor levels and therefore have less thrombosis and therefore have less of a mortality in covid-19. That is just speculation at this point, but it’s an interesting hypothesis, that could be tested. There’s also a

There’s also been a discussion about the fact that there are certain racial and ethnic minority groups that are over represented in terms of covid-19. Specifically, it says here at the CDC 33% of hospitalized patients were black compared to 18% in the community. It goes on to say these data suggest an over-representation of blacks among hospitalized patients. They also noted that black or African Americans had death rates that were substantially higher than that.

out of white or Asian persons

Now when we go back to this article, it states here that Miller and colleagues studied the effect of ABO blood type and race on plasma Von Willebrand factor levels and found that Caucasians had significantly lower levels than African-Americans. Could this also be by coincidence? It’s possible that whatever affects the level of Von Willebrand factor may be a risk factor for increasing death from covid-19, but it could also be a coincidence.

ABO subgroup types, so it would seem reasonable that if we were to put patients on anticoagulation we might be able to reduce the risk of death. Well enter this paper that was just published last month on April 27th. This article is titled anticoagulant treatment is associated with decreased mortality in severe coronavirus disease 2019 patients with coagulopathy.

And what they found was that in all comers, they didn’t notice any difference in 28-day mortality in multivariate analysis. However, when they compared those patients that were sicker they had six scores greater than 4 and they also had d-dimer’s greater than six fold of the upper limit of normal. They did notice that there was a statistically significant Improvement in patients who were on anticoagulation with a p-value of 0.02.

0 to 9 and 0.017 and so their conclusion was that anticoagulant therapy mainly with low molecular weight Heparin appears to be associated with better prognosis in severe covid-19 patients meeting SI C criteria or with a markedly elevated D-dimer. Now remember what the D-dimer is a D-dimer is a marker in the blood that shows that coagulation and breakdown is occurring.

So this is the hypothesis this is what may be going on. We don’t know for sure. But it seems as though the dots are connecting themselves here almost SARS come to causes a decrease in the a stew which causes an increase in Angiotensin II and a decrease in Angiotensin 1:7 increasing oxidative stress causing endothelial cell dysfunction increasing von Willebrand’s Factor leading to thrombosis. So what do we

We do about it. Join us next time when we talk more about this topic. Thanks for joining us.