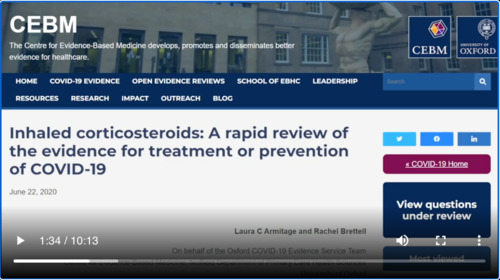 And you can see on the worldometer website which countries seem to be the hot spots in the world. It may have reached a plateau in California, but the number of daily new deaths is slightly higher. And of course those statistics are delayed by a number of weeks. In Texas new cases are continuing to rise as are daily deaths. It seems as though in Florida Daily new cases are also starting to flatten somewhat. It appears, however, as though daily deaths are starting to increase significantly in Florida.

We said that we would be looking at Australia because of the winter season over there and sure enough there has been an increase unclear if it’s related to the season at this point. There’s been two deaths in July as a result so far. Also new concern as well with India as new cases continue to go up. Daily deaths in India also continue to increase but at a more diminished rate.

I wanted to talk about inhaled corticosteroids for COVID-19. Now there’s been a lot of information out there and we can only cover a fraction of what it is that’s going on. And so it’s possible that we could have a good therapeutic intervention for COVID-19. But until we have a randomized controlled trial showing that it’s that. Whether it works or not is simply speculation.

A lot of you have asked whether or not Ivermectin works or inhaled corticosteroids. What about nitric oxide? I’ve looked into these things and I have to admit that there’s a lot of good data that is promising. But let’s not forget the quality of evidence for us to say that things really work well. We have to be at least at the randomized control trial level and from there things go to systematic reviews.

A lot of the data that we’re seeing right now with inhaled corticosteroids Ivermectin, nitric oxide things of that nature even some of the things that I’ve talked about including N-acetylcysteine. It’s down here in the cohort studies in the case-controlled studies case series, even in vitro studies which are even lower. And so for us to say whether or not something truly works, we really need a randomized controlled trial or better.

We currently have those trials in things for, for instance remdesivir and dexamethasone. And that’s why when we have one of these interventions has that kind of evidence and background we’re going to cover it here at MedCram because that’s really important. But that doesn’t mean that we’re not going to cover some of the other things that may be promising. And I think inhaled corticosteroids are one of those things.

Now here is an article that’s not peer-reviewed but was published a couple of weeks ago titled inhaled corticosteroids, a rapid review of the evidence for treatment or prevention of COVID-19. And of course, we’ll put a link to this article in the description below and what this review does is it goes through all of the best evidence at this point in time for using inhaled corticosteroids in COVID-19. Looks at both the in vitro research and also some of the case controlled trials and case presentations of patients who were taking inhaled steroid. And the conclusions that they came up with was they found that the in vitro studies showed that ciclesonid had actual antiviral properties. It also had lower immunosuppressive effects as well.

However, interestingly budesonide had no reduction in viral replication and there was no reduction in inflammatory cytokine release with budesonide either. They do see here of that more research is needed which of course is true. Now, of course remember that asthmatics take inhaled corticosteroids all the time.

In fact according to this study that was published in respiratory care about five years ago, they found that inhaled corticosteroids was found to be used in anywhere from 22 to 63 percent of patients with asthma. And that’s interesting when you look at this article that was published in MEDPAGETODAY just here on May 5th 2020, even though early on asthmatics were considered as being at an increased risk for severe COVID-19 outcomes.

What they’re finding here is that it may be the opposite for instance in Wuhan China at the beginning of the pandemic. They found that five percent of patients in China had asthma, yet it was only seen in 1% of patients hospitalized for COVID-19. Similarly in New York during the outbreak there asthma was not even in the top 10 of the comorbidities found, even though almost 10 percent of New York’s population had asthma. One of the potential reasons could be because ACE2 receptors which is the receptor for the SARS-CoV-2.

In fact the new study in the Journal of Allergy and Clinical Immunology showed that respiratory allergy and controlled allergen exposures are each associated with significant reductions in ACE2 expression. And that ACE2 expression was lowest in individuals with both high levels of allergic sensitization and asthma but again it could be this inhaled corticosteroid connection. This was a commentary that was posted in the Lancet Respiratory Medicine suggesting that asthma treatments such as corticosteroids may play a role because up to 75% of asthma patients in China used in health corticosteroids which supress coronavirus replication and cytokine production in cultured cells.

And this is the Lancet article which we will post a link to in the description below. So just remember that we’re going to need to have those randomized controlled trials before we can recommend to anybody on a regular basis that they take this type of an inhaler if you’re diagnosed with COVID-19 because remember that even though the steroid inhaler maybe only on for a week or two at most. If you’re thinking about taking this as a preventative, remember that there are side effects inhaled corticosteroids and they’re not benign. Cataracts osteoporosis pneumonia thrush in the mouth, which is a fungal infection, are just some of the issues associated with long-term inhaled corticosteroid use.

So let’s see how the data turns out on this. I’m sure we’ll be getting information back fairly soon. Here’s also a study that one of our viewers passed along to us in terms of taking N-acetylcysteine. This is an article from the University of Virginia Health System that was published back in 2007 titled one type of antioxidant may not be as safe as once thought. Basically in this article it talked about how mice were given N-acetylcysteine and they were found at high doses to acquire pulmonary arterial hypertension. That study was done in rats. And so was this one. This one was only published about two years ago, and what they found here was that NAC or N-acetylcysteine in actually prevented the acquisition of pulmonary arterial hypertension in rats.

So I’m not clear exactly on what to make of NAC or N-acetylcysteine and the possibility of it causing pulmonary arterial hypertension in humans as these studies were both done in rats. I think we all have to realize that any supplements we take may have side effects to them, but we have to weigh the risks and the benefits of those.

The one study of N-acetylcysteine at 600 milligrams twice daily for six months was this study by Dr. De Flora that was published in the European respiratory journal in 1997. And here they showed that the severity of influenza was greatly reduced even though the infection rate was not when we look in the article in terms of the adverse effects. You can see here that they were very very minimal. And you can see those listed here. So we will continue to look at these interventions as more and more studies come out and especially as we start to see more randomized control trials.

I wanted to talk to you a little bit about some disconcerting news coming out of Kazakhstan and China. A number of news sites are picking up this feed and basically it is a feed from the Chinese Embassy warning its citizens about an outbreak of pneumonia in Kazakhstan. They believe that this is a distinct entity from COVID-19 and that there is already a higher number of deaths this year from this type of pneumonia than last year. They’re not telling whether or not this is bacterial or viral. Apparently officially Kazakhstan has recorded more than 50,000 cases of COVID-19 including 264 deaths.

And what they are saying is that pneumonia in Kazakhstan has killed 1772 people in the first half of the year with 628 deaths in June alone, including Chinese citizens, the embassy said. And according to the state news agency of Kazakhstan, the number of pneumonia cases had increased 2.2 times in June as compared to the same period of 2019. So of course, this is a fluid situation and we will be keeping an eye on this.

Whether or not this is a different entity or whether or not this is unrecognized version of COVID-19 is unclear. Certainly, we don’t have enough data at this point to independently verify whether or not this is new or deadlier than COVID-19. The Kazakhstani government has responded to the Chinese report of this pneumonia being deadlier than coronavirus. And we can see here that the Kazakhstan’s Health Care Ministry brand of the Chinese media reports based on the embassy statement as quote fake news. They further went on to say that the information published by some Chinese media regarding a new kind of pneumonia in Kazakhstan is incorrect, the ministry said. Thanks for joining us.