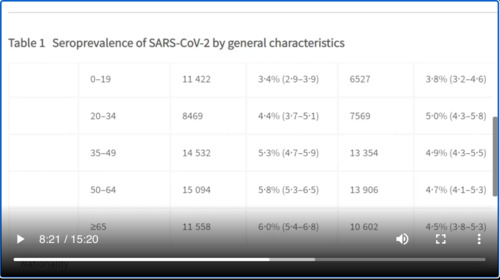 Welcome to another MedCram COVID-19 update. This time, we’re going to talk about antibody response, which is really important in terms of the direction and the future of this virus and in terms of immunity. But before we do, let’s look at cases in the United States, which is a hot spot in the world right now.

We see that daily cases have increased. And unfortunately, we may be seeing here, for the first time, a spike or an increase in deaths in the United States. I can tell you personally, in California, we are seeing an increase in the number of admissions to the intensive care unit, and in fact, to the hospital. I work in a hospital in both San Bernardino County and also in riverside counties in Southern California, and both of those hospitals are increasing occupancy on COVID-19 patients.

And while the seventh day moving average looks pretty flat, there is a small signal there in increases of deaths here in California.

And if we go to the Los Angeles County website, if we look at the past three-day average, the number of hospitalizations are up considerably here in July, meeting and surpassing the peak that we initially had back in April.

This is not unusual for the southern states, we’re seeing the same here in Texas in terms of daily new cases, and also unfortunately in deaths, those are also increasing in Texas.

Around the world, the new cases in Brazil, hopefully maybe peeking, although it’s too early to tell in terms of daily new cases.

Whereas daily new deaths in Brazil seems to have plateaued at about a thousand deaths per day.

And the other hot spot in the world, Russia seems to be having a decrease in the daily new cases.

Whereas the daily new deaths in Russia seems to be more sporadic and at least of late increasing.

So as mentioned, I wanted to talk about the impact of serology and antibodies post COVID-19 in these patients. And I’ll refer you back to an article that we referenced in a previous update that was published on the 18th of June in Nature Medicine titled “clinical and immunological assessment of asymptomatic SARS-CoV-2 infections”. And in this study, they looked at just 37 asymptomatic individuals in China who are diagnosed with RT-PCR-

confirmed SARS-CoV-2 and wanted to see what happened to their antibodies compared to the symptomatic group.

And what they looked at whether it was in the asymptomatic group or in the symptomatic group and whether you’re talking about the amount of immunoglobulin G levels or whether they could neutralize the virus, the neutralization rate. You could see here that over time, going from the acute phase and pink to the convalescent phase here in blue that there was a decrease in those titers whether, again, it was looking at the actual log levels or whether it was looking at the neutralization rates.

Another way of looking at it is looking at the acute phase and the amount of patients either asymptomatic or symptomatic that had a positive IgG in blue or those that had a negative IgG, the ones in green. Now of course, if you have a positive IgG, there’s a chance that you could theoretically neutralize the virus the second time around and you can see there wasn’t much difference in the acute phase whether it was asymptomatic or symptomatic. However, in the convalescent phase, which is the phase that you’re interested in to see if there would be a reinfection, you could see that only 60% in the asymptomatic group had IgG positive, whereas 87% in the symptomatic. So, this seems to lend credence to the theory that asymptomatic patients who turn positive on a SARS-CoV-2 test may be less likely to have neutralizing antibodies.

So based on just those 37 patients, the authors of this study in Nature came to the conclusion that together these data might indicate that the risks of using COVID-19 “immunity passports” and support the prolongation of public health interventions, including social distancing, hygiene, isolation of high-risk groups and widespread testing. Additional longitudinal serological studies profiling more symptomatic and asymptomatic and individuals are urgently needed to determine the duration of antibody-mediated immunity.

In addition, low levels of anti-viral IgG in asymptomatic patients, who might be more likely to become seronegative further support the need for timely serosurvey to study the true infection rates. Well, the reason why I bring this up is because we now actually have just one of those studies.

So, this is a very very large study that was conducted in Spain, which is, you recall, was a very hot spot just a few months ago. And this was published in the Lancet on July 6, 2020 and it’s titled “prevalence

of SARS-CoV-2 in Spain: a nationwide, population-based seroepidemiological study”. Now, whereas that previous study in Nature was only 37 patients in the symptomatic and asymptomatic group. This is a much much larger study, looking at 35,883 households.

So, what they did was they screen for 102562 individuals that were screened for eligibility all throughout Spain, based on a number of issues, based on population size, based on the 50 provinces and based on where the hotspots in Spain were at the time. And after went through eligibility issues, patients actually not even being alive and which ones were eligible for inclusions, which ones could not be contacted, which ones declined, which ones were missing data points and things, they finally came to 51958 included in a point-of-care test and immunoassay analysis. And there’s really no equal to this study that I’m aware of anywhere else in the world. So, if you really want to have real world answers to some of the questions that we have, I think this is a good place to start and it’s a very good epidemiological study.

Now, I’ll be the first one to tell you that I am not an epidemiologist. My strengths lie

primarily with pathophysiology and mechanisms and clinical medicine because I treat patients, so I will leave a lot of the peer review and the analysis to those of you out there in the audience that are trained epidemiologist. But let’s at least see what these authors conclusions were.

So, this testing was done between April 27 and May 11th of 2020 and that’s important to understand because that’s just during and after the period of time in Spain when things were very hot in

terms of SARS-CoV-2. So what they found was that the seroprevalence for the entire country was 5%, and this was by the point-of-care test which they talk about later. And it was 4.6% by the immunoassay.

Nevertheless, let’s take a look at some of the results that they came up with.

And they found here that in terms of gender, there was really no difference, 5% for female, 5% for male.

Interestingly, as we go from age 0 to 19 and different brackets up to and over the age of 65, notice that the prevalence of seropositivity goes up in a stepwise function, with the highest being 6% in those greater than the age of 65. Briefly looking at occupation sector, we can see here that generally speaking it hovers around the average of 5% until we get to health care when it’s double that at 10.2%.

And also notice that nursing home or other social work was also statistically significantly well above the 5% on average.

Interesting statement, among those participants with a history of COVID-19 related symptoms who presented antibodies, the proportion of individuals reporting a previous PCR test ranged only between 16.4% and 19.5%. Among them, a positive PCR was obtained in 75% and 78%, respectively. This means at this point along in the pendemic, only about 20% of those people that were having

classic histories of COVID-19 were actually getting the PCR testing.

So, something clever that they did is by using two different tests, they were able to leverage whether or not you wanted high sensitivity or high specificity and that’s communicated here in this paragraph. They say here “to our knowledge, ENE-COVID is the largest population-based SARS-CoV-2 seroprevalence study in Europe. With more than 61,000 participants, the size of the study surpasses the combined 35784 Individuals described in a recent review of serosurveys. The use of two IgG antibody tests aimed at different SARS-CoV-2 antigens allows us to specify a range of seroprevalence between 3.7% and 6.2%, depending on whether we favor greater specificity (ie, a positive result in both tests), which might be preferred when prevalence is low, or greater sensitivity (ie, a positive result in either test). These estimates confirm with the magnitude of seroprevalence suggested by smaller studies.”

Further, they go on to say that the first wave of the study was done while Spain was under lockdown. Participants working in essential sectors did not show higher seroprevalence values than the general population with the exception of healthcare workers who had been previously reported to have a greater exposure to SARS-CoV-2. In Spain, healthcare workers comprise 24% of all confirmed COVID-19 cases-a proportion partial explained by greater access to PCR testing-and 9%

of hospitalized cases in their age range.

They also point out in their discussion based on the 20% that we talked about that there was a substantial number of symptomatic patients with COVID-19 that did not undergo PCR testing. However, they also say that only 15 to 19 percent of symptomatic participants had antibodies against SARS-CoV-2, which could suggest that a sizable proportion of suspected cases might have had symptoms caused by something else.

What they were able to confirm is that in patients who have confirmed PCR tests that 14 days after those tests that 90% had seroprevalence, which means they had antibodies, specifically IgG antibodies against SARS-CoV-2. What we don’t know is if those patients who don’t have antibodies are susceptible to reinfection.

Something interesting to note going forward is that they found that although immunoassay had better performance features, the rapid point-of-care test yielded comparable epidemiological information while having a greater uptake, lower cost and ease your implementation. “In conclusion, our study provides nationwide and regional estimates of SARS-CoV-2 dissemination in Spain, showing remarkable differences between higher and lower prevalence areas. One in three

infections seem to be asymptomatic, while a substantial number of symptomatic cases remain untested. Despite the high impact of COVID-19 in Spain, prevalence estimates remain low and are clearly insufficient to provide herd immunity.

This cannot be achieved without accepting the collateral damage of many deaths in the susceptible population and overburdening of health systems. In this situation, social distance measures and efforts to identify and isolate new cases and their contacts are imperative for future epidemic control.

So, I think this is an interesting study and one in which those of you who are inclined to epidemiology can sink their teeth into and look at the numbers. Of course. There’s also the question of declining antibody titers over time. In other words, the question of whether or not somebody today who has antibodies against COVID-19 and SARS-CoV-2 will have it in a few months’ time. Additionally, the further question of whether or not those antibodies if lo

st means that the patient is now impervious to immunity or has lost immunity to that virus.

An excellent article summarizing those questions was published a couple of months ago in the JAMA Network and I’ll post a link to that article in the description below.

However, I’ll tell you the conclusion. They say, “in summary, existing limited data on antibody responses to SARS-CoV-2 and related coronavirus, as well as one small animal model study, suggest that recovery from COVID-19 might confer immunity against reinfection, at least temporarily. However, the immune response to COVID-19 is not yet fully understood and definitive data on post-infection immunity are lacking”.

So, what do you think and will vaccines be able to do any better than the virus itself in terms of creating immunity? leave your answers in the comments below. Thanks for joining us.