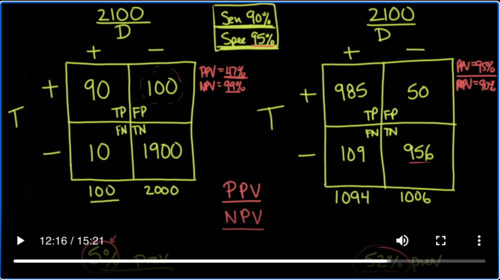 Welcome to another MedCram COVID-19 update. If we take a quick look at the states in the United States with the highest deaths per million population, we will see them listed here with New York, New Jersey, Connecticut, Massachusetts. These are basically the states of the Northeast. And as we go down we’ll run into this USA total which is kind of the average. And below that we have those states that are below average at least at this point.

If we take a look at Canada, we see that the daily new cases are starting to drop off as are the daily deaths in Canada. There’s been some concern made about what’s going on in Brazil. However, we see that the amount of cases have stopped increasing at least at this point in Brazil, or we can at least say that they have stabilized. And as we put it all together for the entire world, we can see or try to imagine that there is perhaps some sort of a leveling off there in terms of total deaths. But total cases seem to be rather linearly increasing.

So let’s take a little bit closer look at that. Let’s go back to New York, which had the highest cases per million. So if any state is approaching herd immunity, and I’m not saying that they’ve gotten there yet. But if any state would be there, it would be New York. And as we can see there, the daily new cases has dropped off that may be because of weather. It may be because of physical distance and that people are keeping away from each other. It’s going to be interesting to see what happens here with opening and whether or not these numbers increase towards the end of the fall and going into winter. And speaking of herd immunity, let’s talk a little bit about antibodies.

Recently, there was this article that was published by CNN Health titled, Antibody test for COVID-19 wrong up to half the time, the CDC says. And if you go to their website at the CDC, there is an article, Interim Guidelines for COVID-19 Antibody Testing. And we’ll cover that in just a second. But let’s go back to the CNN article and it all boils down to this line. They say in a population where the prevalence is 5% which is what it probably generally is in a number of places in the United States, a test with 90% sensitivity and 95% specificity will yield a positive predictive value of 49%. In other words, less than half of those testing positive will truly have antibodies. That’s a real problem because there’s a lot of false positives with that. So what is going on and how can we best understand that?

So we can back calculate and figure out that the number that goes in here is 90, that this is 10, that this is 100 and this is 1900. So let’s do the math. 90 divided by the total number which is 100 is 90%. That’s the sensitivity. Notice that as the sensitivity goes up, the false negatives go down. And if the false negatives go down, that would mean that if you were to get a negative test result, it’s most likely going to be a true negative. Now conversely, let’s look at the specificity. The specificity here is 95%. What does that mean? That means that the true negatives divided by the total number of negatives is 95%. Notice that when the specificity goes up, the number of false positives goes down.

So that means if you end up getting a positive on a test, the chances are it’s going to be a true positive. And so because of that you can say that if something is very sensitive and it’s negative you can rule it out. But if something is very specific and it’s positive, then you can rule it in. So these are our test characteristics and we’re going to use those again.

Let’s take another snapshot of the same town except. A number of months later when our people have contracted the disease and the prevalence in the population has gone up. Instead of being 5% like it was in our first example, now we’re going to look at a prevalence of 52%. Still, the town has 2100 people. And again, we’re going to be looking at the same thing disease you either have it or you don’t and testing you either are positive or your negative.

Well, because 52% of the people of 2100 have the disease we can now know that instead of just 100 people having the disease, we have 1094 people having the disease. And therefore, we have 1006 people that don’t have the disease. Well again, we’re going to be using the same characteristics of sensitivity of 90% and specificity of 95%. And so we can fill in the numbers again. This is true positive, false positive, false negative, true negative. And the numbers go like this, 985 and 109, 50 and 956. If you take 985 and divided by 1094, you’re going to get the sensitivity of the test which is still 90%. If you take 956 and divide it by 1006, you’re going to get the specificity of the test, which is still 95%.

So let’s write that down. In this case here the positive predictive value is going to be 90 divided by 190 in which case that equals 47%. But if we look at the negative predictive value in this one, then it’s 1900 divided by 1910, which is a very high 99%. So when the prevalence is low at 5%, if you get a negative result on your antibody testing, there is a very good chance that it’s a true negative. However, if you get a positive result, when the prevalence in the population of COVID-19 is only 5%, then your positive predictive value the chances that you actually have really truly antibodies against COVID-19 is only 47%. And the reason why that’s the case is because there’s such a high amount of false positives.

The way you want to get the false positives down as we talked about is by picking a very specific test. And in this case, the specificity is only 95%. What you need is a specificity test of much higher value in order to have a positive predictive value that’s worth anything at all in this population. But now to show you how prevalence affects positive predictive value, we’re now going to go to our 52% prevalent population and do exactly the same thing.

So in this case we’re going to take 985 and divide it by the total number of positives which is 1035. And in this case, the positive predictive value is 95%. What does that mean? That when the prevalence is higher at 52% instead of just 5% and you get a positive value and you’re using exactly the same test. Now you’re much more confident that this positive test result actually means that you really do have antibodies against the virus. And the negative predictive value again is 956 true negatives divided by the total number of negatives which in this case is 1065. So when you do that, your negative predictive value is 90%, actually lower than it was when there was less prevalence.

Now notice what they say here. In a high prevalence setting that would be the one on the right that we did, the positive predictive value increases that’s exactly what we found- meaning it is more likely that persons who test positive are truly antibody positive- than if the test is performed in a population with low prevalence, remember that was the one on the left. When a test is used in a population where the prevalence is low, the positive predictive value drops because there are far more false positive results since the pretest probability is low.

What do they say we should do? Let’s look at testing strategies. Three strategies can be used to improve the positive predictive value. Choosing a test with a very high specificity, perhaps 99.5% or greater, will yield a high positive predictive value in populations tested with prevalence greater than 5%. And that’s exactly what we just said. The other thing you’d like to do is to focus your attention on testing people that have what they call a high pretest probability. For instance, our medical group is testing people in high pretest probability. So if they have a limited number of tests, they’re not going to be testing people who don’t have a high incidence of the disease by for instance, seeing people who may not be interacting with patients who have COVID-19, but instead testing intensive care physicians and hospitalists who are actually working in a COVID-19 unit. That would be the population with a higher prevalence and therefore it would make more sense to use antibody testing in that population.

I’ll let you read the rest of this article on the CDC website. It actually gives some very good information in terms of persons who test positive for anti SARS-CoV-2 antibodies. Thanks for joining us.