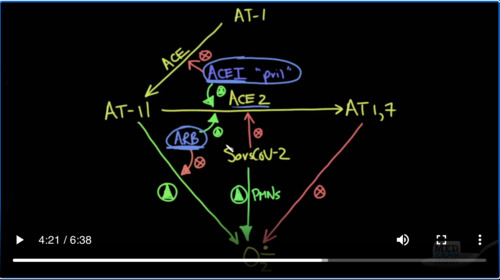 Medcram.com wasn’t another medcram covid-19 update. I am back in the ICU this week again, and I’m noticing that it’s very easy to admit a patient to the hospital with covid-19, but it’s difficult to discharge the patients. The patients are not getting better very quickly and nursing homes want to- test before they’ll take them back in most cases.

Here are the daily new cases in the United States and they seem to be taken undulating the parents with a period of about seven days interestingly the same pattern appears with daily deaths.

We’re not seeing that in Canada would daily new cases.

But there is a similar appearance with daily deaths in Canada.

In terms of new cases United States still tops a list, but it’s followed by Russia and then Brazil and in the UK and then India, so we’re starting to see a little bit different pattern here.

As we can see here new cases in Russia is really starting to take off. Okay. I wanted to bring you up to date on some information regarding the blood pressure medications ACE inhibitors or a Arby’s and there was recently an editorial that was published about three studies in the New England Journal of Medicine on May first regarding the Inhibitors of renin-angiotensin-aldosterone system and covid-19. And remember what we talked about last time. We said that Angiotensin 2 is conversions.

To by the enzyme Ace. So there are medications called an Ace inhibitor those end in pril like lisinopril like enalapril Etc. And what they do is they block Ace that’s good because when they bla case you don’t have as much Angiotensin 2 and therefore you won’t get as much oxidative stress at the same time. There’s also something called an ARB and NGO 10

And so the question for a long time would be because ACE inhibitors increase the amount of a stew. Is that going to lead to more infections? Because there’s more targets for SARS Cove to in other words. How does ACE inhibitors or a Arby’s effect number one the ability to become infected with covid-19 and number two the course of the disease itself because you see how too many people on these blood pressure medications who had high blood pressure or who had kidney disease.

And this article actually steps us through it. Now. All of these are observational studies. And so there’s a lot of confounders with the first one looked at patients in 11 countries. And the number was 8910 subjects. And in that study, they found that for Ace and a RBS when they did the analysis there was no association with increased risk of death.

And I did another Association on this and they found that even those who had hypertension. There was no increase risk of death. There was another study that was done this time looking in Northern Italy and here they looked at 6272 and they match them with thirty thousand seven hundred and fifty nine patients of the same gender and location and they found that ACE inhibitors and ARB

Did not associate with a higher risk of infection, which means that even though these things may have increased the amount of a stew and potentially more receptors for the virus. It did not increase the risk of infection. The third study was in New York City and it looked at 12,000 594 and again, there was no association with Ace or ARB s

Is with covid-19 positivity or severity of illness now, if we go back to this analysis back here the one that looked at eleven countries, they did find something interesting with statins. These are medications that are used for cholesterol. And they also found it with ACE inhibitors. These medications were associated with a decreased in house or in-hospital mortality, but they were not associated with an increased risk.

Risk of getting the infection. So that is actually quite remarkable. Thank you for joining us.