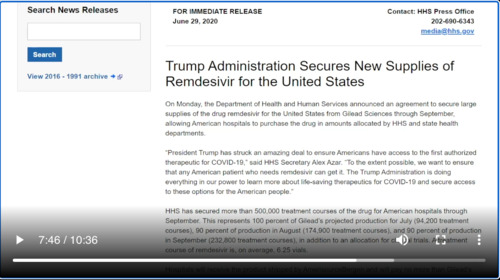 Welcome to another MedCram COVID-19 update. Daily new cases in the United States continues to rise, while the daily deaths continue to decline. If we look at hot spots in particular states like California, clearly we can see that there is a swelling of new cases. But in that state the number of deaths is relatively static as you can see. In Arizona, we can clearly see a bump in the number of cases and an actual increase in the number of deaths as a seven day moving average.

In Texas, the number of daily new cases is increasing. And so are the death rates are starting to see that go up as well. In Florida, we’ve seen a bump there. Hopefully there’s a peek fortunately the number of daily new deaths has remained static it seems as well at least for now. Brazil may have seen a peak here in daily new cases, however the number of deaths on a daily basis is still quite high. Russia also with a substantial number of cases on a daily basis, although it seems to be easing its way down. Daily deaths however seem to be pretty static may be making their way down in a slight way.

Finally India is having an increase in cases pretty dramatic. They may have reached a peak there. It’s unclear. Daily death seemed to be on a slow increase, there’s a little bit of a difference there in terms of how they were calculating the number of daily deaths it appears, but definitely still an uptrend.

I wanted to show you a pretty cool calculator that I found called COVIDAge Risk Calculator by EverestHealth and what you really want to find out is what is your COVID age? And of course we will put the link to this calculator in the description below. But basically what you do is you go to this site and you simply just type in information. Let’s just type in some things here. Let’s say you were born on June 12 in 19. Now let’s pick 74. Let’s say you’re a female and then you can click here if you have any underlying conditions for instance chronic kidney disease, cardiovascular disease, chronic lung disease or if you’re immunocompromised.

Let’s click on one and say you’re immunocompromised, that’s going to add about 15 years to your age. Then you can put in your weight. Let’s say you’re 5’4’’ and you weigh 110 pounds. It will calculate your BMI and take off some years if you like, and then you can type in your circomference in inches or you can switch it to centimeters if you are so inclined. So let’s just type in 32 inches. And how many cigarettes do you smoke per day? Let’s say you’re a nonsmoker. Now put that to zero and you can put in your blood pressure or you can choose not to put in your blood pressure. And you just won’t get an arrangement. There’s something here called the AngioDefender or the %FMD and you can learn more about that here. You don’t know what to put in there. You can just leave it blank and will be 0 years.

If you know what your hemoglobin A1c is, you can put that in. And if you know what your triglycerides or your HDL-C and the units for that, It’s a million bowls or milligrams per deciliter. If you don’t know, you can leave it blank. And finally, you get down to what your COVID age is. So here you’re 59 years eight months three days. And what I find most helpful is this information here. What’s the risk if you develop an infection? what’s your risk specifically for hospitalization? What your risk for ICU admission? And what’s your risk for mortality? And you can actually play with this here. Now. Let’s say instead of born in 1974, you were born in 1945.

Well, now you can see here that your risk goes up. Let’s say you were born in 1942. Again, your risk goes up. If you’ve got chronic kidney disease or cardiovascular disease, there’s probably a good chance that once you’re that age you’ve got a blood pressure that is untreated at let’s say 160 over oh let’s make up 80. Now you’re talking about the chances of hospitalization, the chances of your ICU admission and the mortality rate if you were to get COVID-19 and starts to become a little bit more real. Also, it becomes a little more real here in terms of what happens if somebody in your family were to get this.

What’s their chances of getting hospitalized? You can click on the summary and they will give you a summary. You can print it out. You can save the results. You can email it to somebody as well. And so this is a pretty interesting risk calculator. What I find that was you about this one. Is it told you your individual risk of these things? Other calculators that I saw calculated the hospitalization in terms of populations?

Well, we’ve been talking about Remdesivir quite a bit recently. And as you know Remdesivir was given emergency ratification if you will from the FDA to be used based on the ACT trial and it was stopped early which showed that it reduced the time for recovery and it almost showed a statistical significance in terms of mortality. Although many people feel that if the whole study was to have continued to the end it would have shown statistical significance.

And you also may know that Gilead the maker of Remdesivir gave basically all of its stock of medications to be distributed in the United States to patients around the country. And there was about a million and a half dosages of those and it seems as though now that that is coming to an end. And so the question is what do we do with the remaining doses. And there’s an interesting article here in the JAMA Network which will post a link to, which is proposing a lottery system to allocate scarce COVID-19 medications. And this specifically talks about the issues with Remdesivir and Gilead Sciences as you know, recently now, they’re starting to produce these medications Remdesivir and they were going to be selling it.

And here’s an article from The Wall Street Journal showing that COVID-19 drug Remdesivir is to cost 3,120 dollars for a typical patients and that would be for five days. They get two doses on the first day and a dose thereafter for five days if they’re not on the ventilator. So now we get into the interesting aspect of the fact that the drug maker Gilead needs to sell its medication because it’s put all of that research and development into this drug and now they need to sell it to get back some of that return.

Of course, the United States is not the only market for this medication. And as more of this medication and scarce resource goes overseas, that means less of this medication for Americans. Then of course, this is where it gets interesting because we go to the Health and Human Services.gov website and there’s an immediate release from June 29th titled Trump Administration Secures New Supplies of Remdesivir for the United States. And of course, this is a press release from a department of the executive branch and it says on Monday the Department of Health and Human Services announced an agreement to secure large supplies of the drug Remdesivir for the United States from Gilead Sciences through September, allowing American hospitals to purchase the drug in amounts allocated by the HHS and State Health departments.

That was also the State Health Department’s by the way that allocated the free doses of Remdesivir to hospitals throughout the United States, said HHS Secretary  Alex Azar. Quote to the extent possible we want to ensure that any American patient who needs Remdesivir can get it. The Trump Administration is doing everything in our power to learn more about life-saving therapeutics for COVID-19 and secure access to these options for the American people unquote. And you can read on to see that basically the amount that they’ve allocated is the majority of what Gilead is going to be producing in the next few months, essentially meaning that Remdesivir is only going to be used in the United States at least until September.

And so what we’re starting to see I believe as therapeutic start to come online is the countries that they’re developed in are going to be using them first for themselves before shipping it out to the rest of the world. I could be wrong on this but it’s going to be interesting to see exactly how this works. Now there are other antiviral medications which do have promised which are being used around the world. One of those drugs is favipiravir and as you can see here, it’s a number of phase 2 and 3 trials around the world including in the United States itself, but also in Japan and in India.

Here’s an article from the Canadian Broadcasting Corporation titled China approves COVID-19 vaccine for military use, skips final phase of testing. This is an interesting specific one because it’s also been approved for human testing in Canada. And this is done by a company called CanSino Biologics. And apparently the Chinese Central military commission approved the use of the vaccine by the military on June 25th for a period of one year.

They say that the Ad5-nCov is currently limited to military use. Interestingly this statement CanSino declined to disclose whether the inoculation of the vaccine candidate is mandatory or optional citing commercial secrets in an email to Reuters. So notice what it’s saying here Phase 1 and 2 were completed and it showed it but they’re skipping phase 3 as it says which test the vaccine efficacy and safety on many thousands of people. It’s still the be completed and this step is usually considered the most important for widespread approval according to the US Centers for Disease Control and Prevention. So it sounds as though certain people at least in China if they’re in the military are getting a vaccine which has skipped phase 3 trials. And we’ll send you the link to this article in the description below as well.

I wanted to thank all of you for your wonderful comments on the last video that we had regarding the discern instrument on behalf of the team here at MedCram.com. Thank you very much.