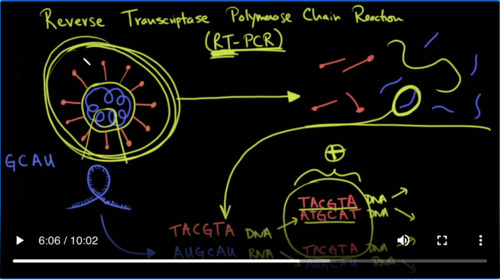 So let’s take a look at the virus particle.

The red areas here are the spike proteins that are used to infect the cell and they usually contact the ACE2 receptor. Then the yellow is the bilipid membrane and it’s essentially the shell of the virus. And inside is the RNA. That is the genetic material and that’s the part that we want to look at.

So if we were to look up really close a loop of this RNA. What you would see is millions of base pairs or a code, and that code is unique to this virus and makes it distinct from any other virus. And if you could find a portion of it that was unique to that particular virus, then you would be able to identify that virus as being specifically of that genome.

And because it’s an RNA virus. It’s going to be made up of base pairs that look like this “GCA” and “U”. Of course it was DNA that “U” would be a “ T”. But it’s a “U”. So let’s pretend that we found a pattern of RNA and it was unique and let’s just make up something. Let’s say it was “AUGCAU”. So what they would do is they would take this reverse transcriptase which basically means instead of going from DNA to RNA. We go the opposite that’s the reverse party we go from RNA to DNA. And instead you would get these type of base pairs that “A” would be paired with a “T”, the “U” would be paired with an “A”. The “G” of course with a “C”. The “C”, of course with a “G”. The “A” again, with a “T” and the “U” again with an “A”. And that would be the DNA base pair and then if you would to do PCR, you would rip these two things apart and their complementary base pairs would once again occur and that would go and look like this.

We have the top one here. And again we would have the RNA one down here. And then again you would have more base pairs except here. You would get something similar again “TACGTA” and here you would get “ATGCAT”. And here you would have DNA. This would be DNA and of course this would be the original RNA and then you would do that again. So this would now rip into this and you can see here with each generation. What you’re going to be doing is you’re going to be amplifying the DNA. And so eventually what you have is a lot of copies of this DNA which you can then put a probe on and get a positive test and that’s how you get a positive test in RT-PCR and this is exactly the way they do “the nasal Swabs”. The nasal swab goes in gets as many viral particles as possible and then it gets amplified using RT-PCR. But the thing that you’ve got to understand is when somebody has coronavirus and they have COVID-19 and their immune system destroys the virus. It’s going to take this virus particle and when it’s all done with it, it’s going to basically look like this.

Maybe some lipid bilayers and of course you’re going to have fragments of the viral particles RNA. This thing here is certainly capable of infecting your cells. This thing over here is not capable of infecting your cells at all. But if we were to take a sample, using a nasal swab and we were to pick up a part of this RNA and then do the same thing with it, which is RT-PCR. You’re

going to get the same results. That would be a positive. Why? Because all you really need to get a positive result is a piece of the RNA. You don’t need an intact viral particle to get a positive test, but you’d need an intact viral particle to infect the host and cause COVID-19. And that is the key to understanding what we’re going to talk about next which is these re–positives and what do they really mean?

Well, here’s a study from the Korean CDC which investigated an analysis of these re–positive cases. These are patients with COVID-19 that recovered got better. And then when they were retested they found they were still positive. And of course, we’ll post a link in the description below to the actual data, but let’s summarize the data and see what it showed. Imagine you’ve got patients with COVID-19, and they get better. And you test them and there’s two possibilities after you test them. So the majority of the patients you’re going to see are going to be the ones that test negative, but there will be those that tests positive and these are known as the retested positives or just re–positives.

So the CDC in Korea looked at 285 such cases and in general these cases were looked at anywhere between one and 37 days later.

But the real question is this: what’s actually going on with these re–positives? I mean are we just picking up fragments,fragments that can’t cause COVID-19 again? Well, they decided to answer that question and so out of the 285. It looks like they did a number of tests on these. One of the tests that they did was they looked at 23 of them to see whether or not they had antibodies and 96% of the patients that they tested which was in this case 23 had antibodies.

And they found that in all of these cases 0% tested positive.

And it would seem it’s that were detecting it in this form. When what you really need in order to infect the cell is the spike protein and the entire genome of the viral particle. Something that is not existent in these post covid patients.

So again, I will go ahead and post this article and it goes through the numbers in a very nice way and you can see for yourself exactly how the numbers come out in this paper from the Korean CDC. And it also kind of puts your mind at ease that these patients who are testing positive may not be related to the fact that their immune system isn’t working. But in fact may be related to the test that we have devised maybe a little overly sensitive to these particles. Specifically these RNA particles and that the presence of an RNA particle doesn’t necessarily mean infected.