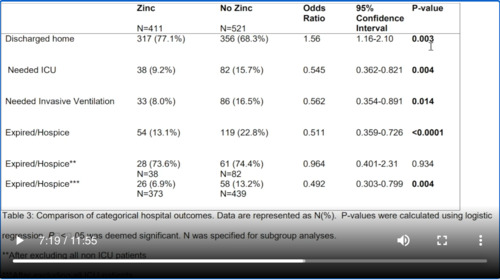 I want to talk about this article that was submitted from New York University Grossman School of Medicine. Now, this is a preprint. It has not been peer-reviewed but it is a retrospective study looking at hydroxychloroquine, azithromyzin and the addition of zinc in these patients. Now, we’ve talked before about the possible mechanisms of hydroxychloroquine in that it could alter the pH of endosomes and the entrance of the virus into the cell. But there’s some clear data which indicate that hydroxychloroquine and chloroquine may act as a zinc ionophore allowing zinc to come into the cell. And that’s important because zinc inhibits the RNA dependent RNA polymerase or the replicase of the coronavirus.

So interestingly they did note that zinc sulfate may be efficacious against COVID-19 in vitro. And so they started adding it in vivo during the treatment of these COVID-19 patients that were admitted to the hospital. And in fact, these were consecutive patients that were admitted from March 2nd of 2020 through April 5th. And what they found is after adjusting for the time at which zinc sulfate was added to the protocol. They noticed an increase frequency of being discharged home, odds ratio of 1.53 and a reduction in mortality or transfer to hospice remained significant, odds ratio of 0.449. And their conclusion for the study was that this study provides the first in vivo evidence that zinc sulfate in combination with hydroxychloroquine may play a role in therapeutic management for COVID-19. So let’s dig a little deeper.

So in addition to talking about the other modalities that hydroxychloroquine and chloroquine may employ to inhibit the coronavirus, it talks about the fact that zinc inhibits the RNA dependent RNA polymerase. That’s something that we talked about months ago in our COVID-19 updates and has been shown to do this in vitro against SARS-CoV. However, it is difficult to generate, they say, substantial intracellular concentrations of zinc, therefore prophylactic administration of zinc alone may not play a role against SARS-CoV-2. When combined with a zinc ionophore such as chloroquine or hydroxychloroquine, cellular uptake is increased making it more likely to achieve suitably elevated intracellular concentrations. This combination is already being tested as a prophylactic regimen in a randomized clinical trial.

Now they did something else, if you can see here the two stars that was after excluding all non ICU patient. So these are just the ICU patients. Notice that there really isn’t much difference between these two and notice that we’re no longer statistically significant. And the way that they might interpret that is to say that adding zinc to hydroxychloroquine and azithromycin really helps in those patients who are early in the course and not in the Intensive Care Unit. That once you get into the Intensive Care Unit, you’re now looking to modulate the immune system rather than stop viral reproduction because at that point viral reproduction is no longer the issue but rather inflammation. Here with the three asterisks that is after excluding all ICU patients, so now we’re just looking at the non ICU patients and you can see here clearly that there is a statistically significant difference in the zinc group 6.9% dying versus 13.2% in the no zinc group.

So I think to sum it up the authors themselves say it here. The main finding of this study is that after adjusting for the timing of zinc therapy, we found that the addition of zinc sulfate to hydroxychloroquine and azithromycin was found to associate with a decrease in mortality or transition to hospice among patients who did not require ICU level of care, but that this association was not significant in patients who are treated in the Intensive Care Unit. Further, they say that this result may be reflective of the proposed mechanism of action of zinc sulfate in COVID-19. Zinc has been shown to reduce SARS-CoV RNA dependent RNA polymerase activity in vitro. As such, zinc may have a role in preventing the virus from progressing to severe disease, but once the aberrant production of systemic immune mediators is initiated, known as cytokine storm, the addition of zinc may no longer be effective. Our findings suggest a potential therapeutic synergistic mechanism of zinc sulfate with hydroxychloroquine. If used early on presentation with COVID-19. However, our findings do not suggest a prophylactic benefit of zinc sulfate in the absence of a zinc ionophore, despite interest in this therapy for prevention. A prophylactic strategy of zinc sulfate should be evaluated to help answer this question.

So I thought this study was interesting because it adds credence to many of you who have commented on many of the studies that have been performed in that they did not add zinc to the regimen. And I do think if we are going to answer this question about truly whether hydroxychloroquine works in COVID-19. There’s going to need to be a prospective randomized controlled trial testing hydroxychloroquine and zinc use together. Thanks for joining us.