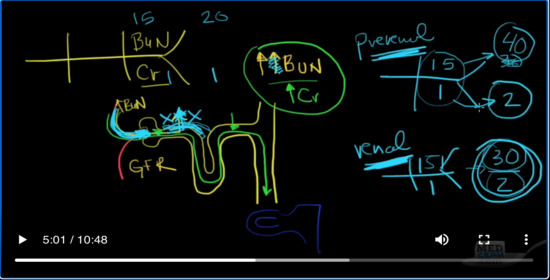 Medcram.com welcome to part 2 of acute renal failure. Let’s review a little bit. We were talking about chem-7. We have to be un and we’ve got the creating the u n stands for the blood urea nitrogen member it’s made in the liver. It is both filtered and reabsorbed whereas the creatinine is the end product of muscle metabolism, and it is filtered and secreted. So, let’s look at

our nephron once again

That’s the loop of henle. That’s the distal convoluted tubule collecting duct. And you’ve got the toilet down here.

Okay, and you’ve got the

the afferent and the efferent arteriole and remember what we said about the unb when is the blood urea nitrogen it goes through and also gets reabsorbed. Okay, so that’s be un and you’ve got the creatinine creatinine does not get reabsorbed.

But instead goes out actually a little bit get secreted here. Okay. So if you’ve got acute renal failure remember that the GFR the glomerular filtration rate is going to go down. So if that’s the case then your be un

And that means that crying is going to go up but it’s not going to go up any more than that because it’s not being reabsorbed. And so what you see here is that the be un goes up more than the correct meaning does when you have a decrease in your GFR just based on the fact that there’s lower flow so lower flow means higher view in the Christian ratio. Okay. So what would be a number here that we could associate with it? So normal would be 4

instance 15 over 1. So if the be went over creatinine if the be um went up by more than that at the creatinine we could say for instance that this would go to a two and a 30. Okay. So the beam would go up to 30 and the current would go up to 2 so you could go up by some having a 15 to 1 ratio. You would have more like instead of even 30 would even go up higher go to 40 so forty to two ratio, which is the same.

A 20 to 1 ratio. So here we would see the normal ratio is 15 to 1 and it would go up to 20 to 1 or in this case for T over 2. And that would be from a low Flow State. Now what would happen here? If for some reason there was a shutdown?

A different type of acute renal failure at acute renal failure not because there’s less flow coming to the glomerulus but instead because the actual tubules which line the nephron something we call renal renal failure if they weren’t working. Well, what would happen is that you would still get a slow down here because these cells are not working and the be one would go up but it would only go up for one reason and that’s because the GFR is low. You would not get reabsorption.

Of this the UN and so what you would have is this would be more of a pre renal what I mean by that is that there is a reduction in the flow coming here and because of that you’re getting the be un increasing because of the low flow and also the be un is being reabsorbed because these cells are working. So that would be a pre renal situation or in a real situation. The cells are not working. And so if the cells are not working

The flow is going to be low as a result of that, but you’re not going to get be un reabsorption. And so it’s going to go up instead of being 15 to 1.

Okay, it’s going to go to 30 over 2, which is still the same 15 to 1 ratio, but they’re both going up with this is not going up more than that is so it still holds the same ratio. So in a renal situation where there’s a problem with the kidney itself, you hold and maintain that 15 to 1 ratio, but when there is a pre renal state in other words, there’s not enough flow coming to the glomerulus. You’re going to get a reabsorption of the be un preferentially.

And that’s going to increase your view and ratio to 20 to 1. Okay. So the bottom line here is that the B12 correcting ratio can kind of tell you what kind of renal failure you have. Is it pre renal is at emia or is it Rena Lazer team neoprene eleiza team is where there’s not enough blood coming to the kidney. Renal Azar. Teammate is where there’s something wrong with the kidney itself. If it’s 20 to 1 ratio like this you’re thinking of pre renal sot Mia if it’s still 15

2:1 ratio its renal a so T Mia. Okay. Another way of looking at that is just looking at sodium and water concentration. So let’s go ahead and draw our glomerulus again a little bigger this time.

That again. Here’s our materialists.

Glomerulus proximal convoluted tubule Loop of henle and collecting tube. You’ll going out to the toilet down below. Okay. So in this situation, we’ve got a renal problem. The real problem is is that these cells are not reabsorbing. In fact, none of them are reabsorbing. There’s a problem all over and so what’s the situation here here? We’ve got plenty of fluid coming to the kidneys, but because these cells are not working.

All of that sodium water is just going right through and out. So we would expect to see a high sodium concentration a high water concentration and therefore a low osmolarity to the fluid and that’s in renal when there’s a problem with renal. Okay. So let’s summarize. Once again, make sure everyone’s on the same page here. So we’ve got the be when okay, what are some of the points?

It’s that we learned about the b u n– it’s synthesized.

In the liver. Okay, it’s filtered.

All that what are some things that can decrease it? Well liver failure.

Okay, and then what about proximal convoluted tubule we see there? We see that it parallels the reabsorption of sodium and water and so we know that it’s reabsorbed.

It’s going to go up. Okay. Now, what about creating? All right, we know that it’s the end product of muscle.

And that it is filtered.

Okay. So what are some things that can increase that they have nothing to do with the kidney function? We know that it can be increased by drugs that prevent its secretion in the kidney and that would be cimetidine.

what are some things that di can decrease IT muscle wasting?

Okay, and we know that it goes up in renal failure.

Okay, let’s talk about the be un to creatinine ratio. We know that because the be when goes up even higher in a low Flow State that it’s usually 20 to 1 ratio. If it’s pre renal free rental again, is any reason that causes a decrease in blood flow to the kidneys and that it’s 15 to 1 in renal?