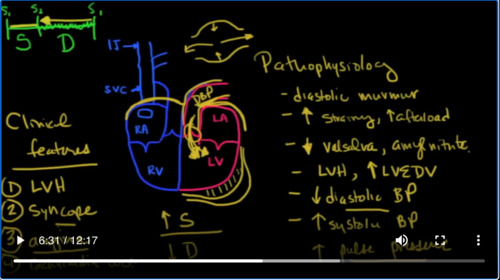 Medcram.com wasn’t another medcram lecture. We’ll talk about aortic regurgitation. We’re going to talk about the causes the pathophysiology clinical features, physical diagnosis treatment. And when we should do surgery, so specifically, we’re talking about the aortic valve and what regurgitation simply means is that the valve is incompetent and we get back flow and what are the causes of that? And what do we do about it? Now in terms of causes you can kind of break it down into those less than 50 and those greater than 50.

Those less than 50 that have aortic insufficiency are usually due to post inflammatory.

Those after the age of 50, have usually to do with aortic root dilatation.

And then in terms of aortic, root dilatation, think about other things. Think about age-related,

Or the other one think about is more fans.

Marfan syndrome, as you may know, is where they’re very tall. They’ve got long legs, long legs and long arms, and they can get aortic, root dilatation, and terms of other things to think about is think about lupus or SLE and this thing called ankylosing spondylitis.

Ankylosing Spondylitis. That’s where they get the bamboo spine, okay? So the pathophysiology of this

Is that this valve, the aortic valve becomes leaky and blood goes back into the left ventricle.

And this occurs of course during diastole. So it’s diastolic.

Okay, anything that increases afterload.

And what’s going to cause it to get smaller the murmur to get smaller. Well, anything that decreases the left side of the heart. So that would be a valsalva.

Or anything that causes dilation of the peripheral vasculature. That would be like amyl nitrate.

Now, as you may recall, this aorta kind of works as what the German word is. Like a wind Castle. Basically it expands during systole and then as diastole occurs it contracts as it contracts, a kind of ends ends up like being a pump by itself, pumping the blood forward. However, in aortic regurgitation, instead of that blood going forward, the blood goes backwards and backwards here into the left ventricle. So you’re going to get left, ventricular hypertrophy.

And you’re going to get an increase in the left, ventricular, end-diastolic volume. Now, in addition to that, because during diastole, you’ve got all this blood coming back, into the left ventricle, you’re going to see a low diastolic blood pressure

And because there’s more blood in the left ventricle right before systole more blood is going to be a ejected out. And so therefore, you’re going to see an increase in systolic blood pressure. This is known as a increase in the pulse pressure, which sets up some pretty interesting physical exam findings. So, in other words, when you take the blood pressure, and you take the systolic over the diastolic, you’re going to see that the difference between those two pressures is going to go up. So, let’s quickly talk about some of the clinical features.

Now why is that you think you should know? Is that the coronaries come off of this area in the aorta and what drives blood pressure or what drives perfusion in these very important coronary arteries is actually the diastolic blood pressure, okay because flow occurs mainly through the time period of diastole. And so during diastole is when you’re going to get this pressure here, pushing blood through the arteries to The myocardium.

Your diastolic blood pressure is low because it’s instead of going into the coronaries, it’s going back here into the left ventricle. You’re going to get a decreased coronary artery perfusion pressure and as a result, you’re going to get angina. Now, one thing I will say is that when you look at systole through the cardiac cycle from one period, to the next period, let’s say, we start at S1, S2 is fairly short after it and then you’ve got diastole. So this is systole, and this is diastole.

Okay. Now where is this regurgitant flow occurring? It’s occurring between S 2 and the next S1 which is diastole. Something that you may not know is that when you speed up the heart rate, this period of time between S1 and S2 doesn’t really change much it stays the same. What does change is the time period of diastole it gets shorter and shorter to allow for a faster heart rate. The point is is that as the heart rate speeds up diastole become

Shorter and shorter and therefore the time for regurgitation becomes less and less. So, as a result of this, you usually see that tachycardia

Okay so tachycardia is well tolerated in aortic insufficiency. Okay let’s talk about physical diagnosis. What you’ll see is because this is getting larger. You’ll see the apical impulse.

Is going to be displaced downward and to the left. And then the actual diastolic murmur is going to be a high pitched murmur.

Heard at the left sternal border and it’s going to actually be heard quite well, if you have the patient lean forward. So if they’re sitting on a table, have them lean forward. And then place, the stethoscope there, that will bring them murmur closer to the chest wall and you’ll be able to hear it much better. Now, an interesting thing that occurs is something called the Austin Flint murmur. It’s actually one guy just with two different names. Austin Flint is the murmur that occurs when blood goes back across the

It valve and because it’s flowing in here. It tends to keep this mitral valve closed, or at least almost closed. Now, remember that blood is supposed to be going from the left atrium into the left ventricle during diastole. And if this blood from the aorta is coming in and closing that valve, or at least I try and attempt to close that valve, you’re going to get a functional.

A or mitral stenosis that is the murmur of the Austin, flint. And that’s a rumbling.

Okay, that’s a rumbling sound so you might hear a high-pitched murmur and then a rumbling throughout diastole that could be an Austin Flint murmur, that’s associated with an aortic regurgitation. Remember that’s the from the vibrations. Now we talked before about this increased pulse pressure so that the systolic blood pressure is high and the diastolic is load. That causes a change or a pulse pressure. That’s going to make the pulse pressure. Go up from our equation as a result of this. You’ll see that

That people’s pulses are very bounding and they’re very large and amplitude and there’s a number of things that are found on physical exam. You may want to know some of the names but they’re not essential. So this is known as a corridor pulse.

Okay, if you’ve listened to this, or if you feel this in the femoral area, it’s known as a pistol shot.

That’s known as the rosie. A sign D. You are o z. IE Z throws a sign. Okay. Now if you see a bobbing head,

That’s known as do you say, sign DEC, space. Mus s, ET and interesting. That used to think that Abraham Lincoln had marfan’s disease because they felt number one. He was very tall and also that whenever they looked at pictures of him, they found that his head was kind of a blur, and they needed to take long exposures back in those days. And because of this Doom, you say, sign that he must have had from aortic regurgitation.

That they felt that this was proof that he had marfan’s disease. I don’t I think the jury was out on that. They don’t really know if he did or not or maybe the photographer was just a bit too. Shaky anyhow, just a little way to put all that together. Another thing is Quinn Keys pulse.

So these are all signs of aortic insufficiency. Of course you’re going to order an echocardiogram to make the final diagnosis on that but interesting nonetheless. So again how are you going to make the diagnosis?

And today’s day and age, it’s going to be echocardiogram, there could be able to look at the valve. They’ll be able to tell you how much regurgitation there is and some other things that might lead you to think is a chest x-ray. What are going to see on a chest x-ray? Well, if it’s severe, you’ll see this left ventricle and large, you will also see pulmonary, vascular congestion possibly obviously a cardiologist before surgery is going to do a cath, where they actually float in a catheter into this area. They can release contrast and they

How much is going back and forth and they could actually calculate the regurgitant volume in terms of treatment. You’re going to want to make sure most of the blood is going out. So the way you do that is with Loop Diuretics to get rid of some of this excess fluid

And then you want to reduce afterload.

You don’t want to use things like beta blockers, that slow the heart rate down, because remember, if you slow the heart rate down, it’s going to increase the time in diastole. This is going to increase regurgitation and it may steal away some of your perfusion from your coronary arteries. You actually see a reversal of flow in the coronary is if the regurgitation is that bad, then your patience will start having an Jenna, okay? So surgery when you do surgery, basically, when you start to see left ventricular decompensation,

So when you see the ejection fraction going down, when you see more congestive heart failure, it’s really a cardiologist call but that’s when you get referral and of course you’re going to get an aortic valve replacement. You can either get a bio prosthetic valve, which does not require anticoagulation or you’ll get a mechanical valve which does require anticoagulation. Thank you for