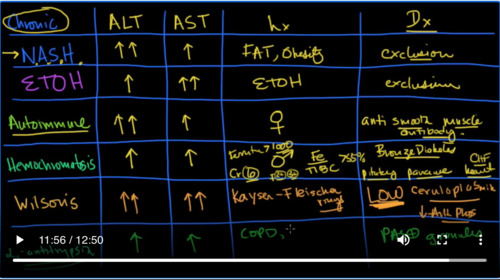 Okay, so welcome to another MedCram lecture. We’re talking about liver function tests. It’s the third lecture where we talked about actual diseases. And I wanted to break them up into acute liver diseases, chronic and finally cholestatic.

So let’s get started. Okay, so here I’ve made a table of some of the characteristics of Hepatitis in the acute form. It’s like about Hepatitis A. Remember that Hepatitis A is an oral transmission. So you don’t get it by blood, you get it by someone not washing their hands and then getting into the food and then there’s some sort of a fecal-oral transmission you get it. But because this is a liver, you’re going to see an increased amount of ALT over AST, both go up, but you’re going to see more of an ALT type of bound up over the AST. And so how are you going to diagnose this? Remember it’s the IgM anti Hepatitis A virus. Okay, so that’s how you make the diagnosis.

Now with Hepatitis B on the other hand, it’s not oral but it’s intravenous or body fluid.

Okay, and in this situation, it’s very similar to Hepatitis A and that the ALT is going to be higher than the AST because this is the liver that’s being attacked and not muscle or something else. With Hepatitis B, remember there’s different antigens. There’s surface antigens and there’s core antigens and that’s important because if you get an immunization, you’re going to have antibodies against the surface antigen.

So if I could draw a little examples here. If this is the virus particle, the blue is the surface and the core is the green. The core is the actual viral particle. So when they give a vaccine, they’re just using the blue portion of the virus, the non-infectious. So you’re going to have antibodies that are going to be made against the surface antigen, so you so if you have an immunization, you should be surface antibody positive. But you should be core antibody-negative because they never gave you the core. And so what this means is that you the IgM antibody to the Hepatitis B core antigen should be positive if you actually have the infection.

Okay. What about Hepatitis C? Again Hepatitis C is actually a little bit more chronic and so you’re not going to see as much of an increase here. But again the key point here is the AST is going to be less increased than the ALT. Again, this is intravenous drug use, so IVDA,  abuse. Okay, there’s other things that are associated with this like tattoos, also sharing razors, multiple sex partners. These sorts of things can increase the risk of spreading Hepatitis C. Now how do you check for that? It’s very simple. It’s simply the anti HCV antibody. You can do IgM, you could also check for the Hepatitis C Virus RNA. Within the first three months of the exposure, you should have an antibody reaction though.

Okay. Alright, let’s talk about alcohol now, whereas before the ALT was higher than the AST because this is the liver.  Be aware that in alcohol, they’re about the same or you might even see that the AST is going to be higher than the ALT. It’s not interesting and obviously here instead of intravenous drug use, we’re going to get alcohol use. So that’s, that’s obviously very important difference there. Obviously you want to make sure that there’s not other things going on here. So the diagnosis is basically based based on history.

What about ischemic? Now remember an ischemic you’re getting no blood flow to the liver. So the liver is going to be really upset with that and it’s going to tell you that. And so what you’re going to see is humongous raises in the AST and the ALT and we’re talking several thousand here. Okay, so they really go up and ischemic disease and obviously you’re going to have blood pressures here in the 50s over 30s or something really bad like that or a code situation. And again, you’re going to be ruling out other things here. But if you see this go up and shoot up pretty quickly. I want you to think of ischemia and you just again is going to be based on the history.

Okay. Let’s talk about the chronic diseases. Now obviously you can get chronic Hepatitis B and C and you don’t get chronic Hepatitis A or it’s very rare. So I left those off of here. Basically, they look identical is to the acute situation except the liver enzymes are not as elevated. Let’s talk about NASH, probably one of the most common and stands for non-alcoholic steatohepatitis. Basically, these patients are fat obesities.

So you’re talking about patients with for instance the metabolic syndrome, insulin resistance, hypertriglyceridemia. And the and the history you’re going to basically get for the diagnosis is that of exclusion. You certainly don’t want to just look at someone say they’re fat and that’s why you’ve got NASH. But these type of patients, what do they look like? These patients are liver patients. So they’re going to have a slightly increased ALT over that of the AST, but the ALT will be higher than the AST, but it’ll be it’ll be elevated.

Now, as we said with alcohol, it’s very, it’s just backwards. The ALT is high but the AST is what’s elevated. And again, the history is going to be that of ETOH. And I guess it’s also going to be of exclusion you want to just make sure that you’re not just a subscribing somebody to the old alcohol reason for their liver disease. Make sure that even though they’re drinking, make sure you rule out the other things. Autoimmune hepatitis, that’s that’s the reason why we need to rule this out.

If you have a middle-aged woman who drinks a lot, you certainly don’t want to say that it’s due to just her drinking because it could be due to autoimmune disease. These are the type of patients that get autoimmune disease these young women. So because it’s an autoimmune Hepatitis again, it’s in the liver that’s going to have a higher ALT than AST. So the history in this is that they’re young women. That’s the type of people who get these autoimmune diseases and the thing here that you got to know is this. This is for boards and it’s the anti smooth muscle antibody. If that’s positive, it’s going to be very difficult to say that this is all related to alcohol disease. So look for positive auto antibodies anti-nuclear antibodies, but specifically the answer they’re looking for is anti smooth muscle antibodies.

Okay hemochromatosis. This is uncommon in women, it’s usually because why they have periods and they lose iron. So they it’s very hard to store up with iron, but the history here is that it’s typically in men. And what are we going to see here? Well, if you take the ferritin level and the iron saturation, that’s the when you take the iron, the serum iron and divide it by the TIBC. You’re going to get something greater than 55 percent and usually your ferritin level is greater than 1000. So you’re off the charts with this. And of course the history is that of something called bronze diabetes.

Okay. So look for this patient with diabetes who has a bronze look to themselves. Now, there is an iron metabolism deficiency that you should know. It is on chromosome 6 and how do you remember that? I remember that iron comes in a 2 plus form and also in a 3 plus form, the ferric oust and the ferric iron form. And I know that 2 times 3 is equal to 6. So that’s how I remember. It’s on chromosome 6. I don’t think they will ever ask you that but you can certainly impress your friends with that bit of knowledge.

Okay, what about Wilson’s disease? I think Wilson’s disease showed up on a famous television show once and those of us who studied knew what the diagnosis was before the end of the show. You’re going to have increased ALT and AST. The history here with Wilson’s disease is that they’re young, they get this kind of Korea form movement disorder and psychiatric disease. But the key here is this thing is called the Kayser-K, A, Y, S, E, R, Fleischer- F, L, E, I, S, C, H, E, R, rings. So Google that or look that up on the internet and see what Kaiser Fleischer rings are in the eyes and you will see that.

And the key here is not a high but a low ceruloplasmin. And why is that? Because it’s trying to suck up all the copper. This is a abnormal copper deposition. So you get hemolysis and actually you get a low AUT foss and a low serum and plasma ratio. Okay, and now the one that’s most near and dear to my heart is α1-antitrypsin this but typically we see this with patients with lung disease number antitrypsin. α1-antitrypsin is an enzyme that is in your lungs. It’s made in your liver as well. And what it does is it protects these elastase from breaking your last fibers. And so if you don’t make α1-antitrypsin, you have something called α1-antitrypsin deficiency and you tend to get emphysema more quickly. Well, that’s not the only thing that can happen.

You can get a buildup of this abnormal protein in the liver and you’ll see these PAS positive, PAS positive granules in the liver. And you will get liver disease. It’s a very kind of a low-level liver disease. So you’re not going to see it going very high. But on the history, you’re going to have COPD asthma certainly if they smoke very early in life. If they don’t smoke they’ll have COPD. Later in life they will scratch their head say “Well, how did I get this COPD? I’ve never smoked. ” Well, get an α1-antitrypsin level.

The thing that you should know is there is the worst form of it is the PIZZ allele? Okay, and the normal is the MM but the ZZ is the worst and that’s homozygote recessive. Okay. So this is autosomal recessive, autosomal recessive inheritance. And so how do you make the diagnosis? You don’t obviously do a liver biopsy first off. But you simply get an α1-antitrypsin level and then have them see a liver doc. Okay, so let’s talk about next, the characteristics of cholestatic liver disease and for that join me for the next lecture number four.